View source
For other uses, see Meltdown (disambiguation).
“He didn't get the memo.”
— Movie tagline.

The plot of the film involves the exploits of two business investors in Liberty City. Towards the end of the movie, it is revealed that their former mentor is trying to destroy every business in The Exchange. The two businessmen and their monkey pursue him in a satirical car chase. The dialogue openly references and lampoons clichés in Hollywood filmmaking.

Despite a character (Abner Fitch) stating that Miranda won't speak during the film in order to save costs, she actually does utter a few words at the end.

Michael is hired as an associate producer on the film by Solomon Richards as a gesture of gratitude for dealing with Rocco Pelosi, who initially prevented Richards from assembling the cast. Milton McIlroy then posts on Bleeter to express his excitement over being back on board the production.

Later, Rocco and his associate assaulted Solomon in retaliation for Michael's actions, resulting in Michael killing both Rocco and Gianni.

During Deep Inside, Franklin Clinton can observe the filming of a scene involving Milton McIlroy and Theodore Bickford being directed by Anton Beaudelaire against a green screen backdrop at Backlot City. Theodore Bickford is not actually present though and his part is being filled by an understudy dressed in black to be digitally edited out. Solomon posts on Bleeter about the filming.

Later, Michael is surprised to find Devin Weston and his assistant Molly Schultz in Solomon's office. Devin proceeds to explain that, being one of the two shareholders (the other being Solomon Richards' "idiot" son) in Richards Majestic Productions, he plans to pull the plug on the movie in order to receive a massive insurance payout. With that money, he will pay off Solomon's son to agree to tear the film lot down in order for Devin to build condos, tax free. Solomon feigns to protect a physical movie reel print of the film which is then snatched by Molly who escapes with it, pursued by Michael. They reach the airport where Molly runs into a jet engine in her panic, drops the film canister and is killed. Michael retrieves it and escapes the police attention, later learning from Solomon that the entire episode was needless as the film was shot digitally and there was no such thing as a master print of it.

At the film's premiere, sponsored by Maze Bank and covered by Weazel News, Michael is cryptically informed by Devin that he has sent Merryweather to attempt to murder Amanda and Tracey in retaliation for the death of Molly Schultz. Michael and Jimmy arrive just in time to save the women. If Michael calls Solomon after the conclusion of this mission, Solomon will quote a line from the film: "Capitalism depends on one thing and one thing only: a steady supply of idiots."

If the player chooses option C (the Deathwish ending), Michael receives a phone call after the mission during which Solomon thanks Michael for his assistance and tells him that the film received mixed reviews but that it has become the biggest box office hit of his career. Solomon will also post to Bleeter that he would like to make a sequel.

Much of the film uses footage from GTA IV. The graphics remain similar, however the render distance, lighting and reflections have seemingly been tweaked to replicate those of GTA V. One scene of the movie, where the main character is inside his high-rise office in Algonquin, is clearly filmed inside the IAA office interior, with the Algonquin backdrop edited in. Several other scenes are green-screened footage of driving through Algonquin, with a Banshee edited on top, to give the impression they are driving around.

After the premiere and its associated mission, the movie will be available to view in any of the three cinemas between 6 pm and 10 pm. The trailer for The Simian plays before the film screens. The film can also be viewed in Grand Theft Auto Online in cinemas and the Master Penthouse's Media Room (if owned).

WRITTEN AND PRODUCED BY

The Liberty City Office of Film, Theater and Broadcasting

The film is a parody of the 1987 film Wall Street, where a young stockbroker (played by Charlie Sheen) becomes involved with his hero, Gordon Gekko (played by Michael Douglas).

The film's tagline may be a reference to the 1999 film Office Space. 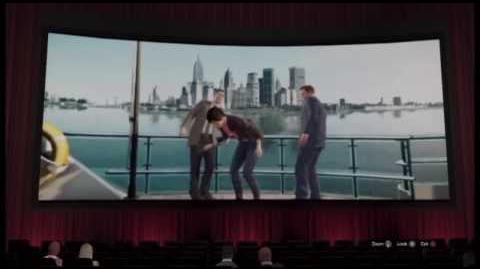 Milton McIlroy returning to work on the film.

A scene being filmed during Deep Inside.

As the scene appears in the finished movie.

Solomon and Michael at the premiere.