In-game time
For other uses, see Meltdown.
“Congratulations, Mikey, we did it. Such a pleasure working with you. You see, I was here. Unlike your wife, seems to be stuck at home.”

Meltdown is a mission in Grand Theft Auto V, given to protagonist Michael De Santa by Solomon Richards.

Michael and Jimmy attend the Meltdown premiere at the Oriental Theater on Vinewood Boulevard. On the red carpet, Michael notices that Amanda and Tracey are nowhere to be seen; Devin Weston appears and, under the belief Michael murdered Molly Schultz, coyly hints that the latter are in trouble - specifically, that he has sent Merryweather agents to deal with Michael's family.

Michael rushes to his house within two minutes and fights off several waves of agents to keep his family safe. After being incapacitated by one agent, Jimmy comes to Michael's rescue and kills the agent by bludgeoning his head with his bong. Michael tells his family to lay low while he makes some calls.

"A movie debut has people buzzing, possibly for all the wrong reasons. Meltdown hits theaters. Solomon Richards' new movie Meltdown is now in theaters and audiences are divided. Some have described it as "derivative Vinewood pap", but others quite enjoyed it. "I really like the film. And the end was heart-warming. The dubbing on the talking monkey felt a little 1980's, though".

"When the screen went dark and Meltdown began, I bathed in the rich images of Liberty City. The vibe was incredible. Then suddenly every movie cliche- was unleashed upon the audience in rapid fire, as empty and soulless as the computer-generated backgrounds. A love interest started and didn't go anywhere. A voiceover appeared in weird places. Bizarre music choices were picked for the soundtrack. As the credits rolled, we were left with a warm fuzzy feeling about what happens when greed tries to win. It never wins. I loved the movie. It has flaws, but much like with my wife and her ever-sagging body, I will plod through the motions and get lost in the nuance."

Jimmy requests Michael to buy a tuxedo, beginning of the mission.

Jimmy and Michael go to the Limo.

Michael points the way to The Oriental Theater.

An angry call from Devin Weston disrupts the celebration.

Michael and Jimmy arriving at the theater.

Going to the red carpet.

Lazlow is covering the event.

Devin gives a small hint on what is happening...

Michael figures out quickly and rushes back home.

Michael and Jimmy arrive. Some mercenaries are seen invading the house.

Michael tells the girls to stay in the bedroom.

Michael fights off several mercenaries inside...

...and outside the mansion.

After the shootout, Michael rushes back to his family...

...and he is knocked down by a gunman.

Jimmy turns off the lights.

Jimmy knocks out the gunman.

Jimmy teabags Michael, mistaking him for the gunman.

The family reunited. Michael tells everyone that he is going to make some calls. 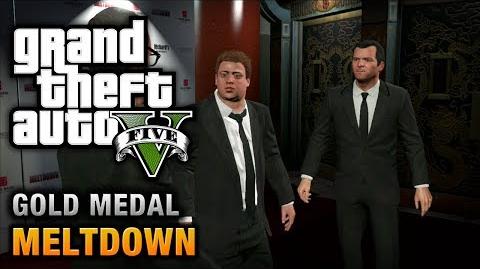 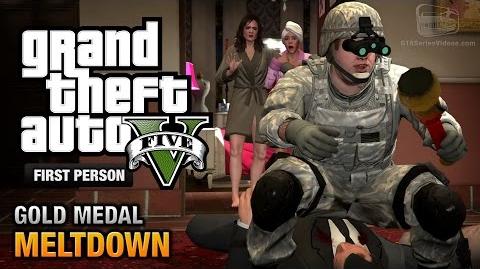 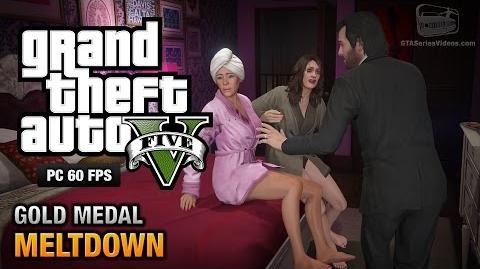