None
For other characters of the same name, see Mel.
“I'm sorry if the truth hurts, but the integrity and impartiality - the truth and nothing but - are how I roll.”

Melanie Mallard, also known as "Mel" by her friends, was born in 1971, and by 2009, she lived in Dukes. At some point prior to 2009, Melanie turned in to the world of film-making, however, she wasn't very successful in her work, failing to get her big break.

Working with Huang and Chan

Looking to make her big break in journalism, documentary filmmaker Melanie Mallard has made a deal with Chan Jaoming that she believes will help her finally make a name for herself as she captures the Triads’ rule of Liberty City’s drug trade on camera. Huang Lee escorts her around as she films the action.

“That bitch has betrayed me! How could she treat me like this? I thought we meant something to each other.”

Later, Chan learns that Mel wants to reveal Chan and Huang's identities on the documentary without obscuring their faces, after she was given a show in Channel 15. Huang arrives to Mel's office, kills her guards and kidnaps her after knocking her out with a bat. Mel's cameraman, however, takes the tape that shows Huang and Chan and tries to escape, but is chased and killed by Huang.

Huang brings Mel to the docks, alongside with Chan. Chan and Huang confront Melanie, who puts the blame on Huang. Chan then says that he loved Melanie, and "love betrayed him". Melanie tries to make Chan spare her life. After a few moments, Chan tells Mel that she can leave. However, as Mel makes her way out, Chan raises his SMG and shoots Mel in the back of the head, killing her instantly. 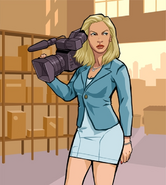 Artwork of Melanie holding a camera.

Melanie is kidnapped by Huang

Melanie about to be shot in the head by Chan.