For other characters of the same name, see Mel.
“I'm through with problems. Now they're just opportunities.”
— Mel in his encounter with Niko.

Mel is a random character who appears in Grand Theft Auto IV. He is a friend of Vlad Glebov in Comrades Bar. Mel is usually in Comrades Bar in the cutscenes for Vlad.

Later on Niko meets Mel again, as a random encounter. Mel appears to be sober, and claims he's cleaning up his life, but needs to pay back some guys from his drinking days. When the men he owes money to claim that Mel pissed on their couch, threw their TV out the window, and got them kicked out onto the street, they try to kill Mel. Niko successfully defends him, and Mel thanks him, giving him $500, never to be seen again. 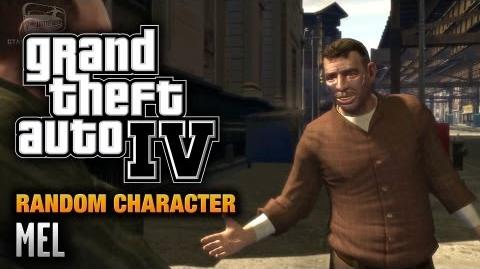 Mel, appearing as a random character.