GTA Wiki
Register
Don't have an account?
Sign In
Advertisement
in: Airports, Locations, Locations in GTA V,
and 3 more

View source
watch 02:52
Roblox: DeepWoken - The Loop
Do you like this video?
Play Sound
Not to be confused with Sandy Shores Airfield, another airstrip in Blaine County.

Signage on the hangar indicates that the airstrip was once owned by Vapid suggesting that the car manufacturer may have operated aircraft at some point. This is likely a reference to the Ford Motor Company Aviation Division that built the famous Ford Trimotor, since Vapid represents Ford. There is also a Jacksheepe badge image at the right of the entrance.

The McKenzie Field Hangar can be purchased by Trevor after Nervous Ron. When purchased, it serves as a business rather than a storage facility, allowing him to conduct Arms Trafficking Ground and Arms Trafficking Air missions for Oscar Guzman, using the provided Dune Buggy and Cuban 800 respectively.

As well as the Dune Buggy and Cuban 800, vehicles can be occasionally found around the airfield, including:

The property cannot be purchased in GTA Online, although it still serves as a spawn location for several aircraft that do not spawn here in GTA V. These will be unlocked as the player progresses through Ranks:

In the enhanced version, Personal Aircraft may spawn here if requested through the Interaction Menu.

The airfield is based on Bakersfield Municipal Airport.

During the heist setup mission Prison Break - Plane the crew is required to steal a Velum 5-Seater from the hangar. The plane is guarded by Vagos gang members which the player must fight his way through in order to obtain the plane. One of the Gang Attacks also happens here.

During The Cayo Perico Heist, in the Heist Prep: Velum, the player will be required to steal a Velum 5-Seater from one of Juan Strickler's smugglers so that they gain the ability to use it as an optional Approach Vehicle for the heist.

In Minor Turbulence Trevor says that he is going to land the Cargo Plane at McKenzie Field, but this is practically impossible as the Cargo Plane is too big for any runway (with the exception of those at LSIA) due to its large wingspan, and it would likely crash into an obstacle. Also, the plane would need a longer runway for taking off and landing. In the end, Trevor never makes it to the airfield, as military forces shoot the plane down, forcing Trevor to evacuate and crash the plane into the Alamo Sea instead. 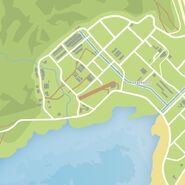 Satellite view of the airfield.

Overview of the location.

A view of McKenzie Field Hangar.

A Duster as it runs along the runway.