The skyscraper and its adjoining plaza and gardens occupy an entire block in Pillbox Hill, demarcated by San Andreas Avenue, Vespucci Boulevard, Alta Street and Power Street. It is the tallest building in the State of San Andreas and one of the most recognizable buildings in Los Santos.

It is the main headquarters for Maze Bank, featuring large Maze Bank signage at the top of the building, which light up at night. At the base of the building, parking garage access is present on the south and east sides of the plaza base, while delivery entrances are found on the north and west sides, but none offer any access underground. The plaza itself can be accessed from stairs at the south-west corner, decorated with fountains and trees. The plaza is made up of a complex of gardens, fountains and steps which circle the building. It can also be accessed from the upper ramps of San Andreas Avenue which elevates to the building's main entrance, equipped with parking ramps leading to a garage door, but are only functional in GTA Online. A foot-bridge connects the plaza to the neighboring Schlongberg Sachs building. Maze Bank brick sculptures are positioned at the north-east corner as well as the south-east stairway entrance. The maze-themed graphics are dotted around the exterior, too. On top of the building is a helipad. Roof access is present but only accessible during certain missions and fully usable in the enhanced version of GTA Online as an Office.

According to the description of the deleted parachute jump "Figure of Eight" in Grand Theft Auto Online, the top of Maze Bank Tower is at an altitude of 1,050 ft, making it almost half the total height of Mount Chiliad. In Jock Cranley's campaign video, it is claimed that the tower was built "prior to 1985".

Despite being a relatively prominent building among the Los Santos skyline, it makes few appearances compared to that of the Union Depository to the north and the IAA and FIB Headquarters to the east.

Large trucks such as Mules can sometimes be found parked outside the west delivery entrance or the south side of the complex, and various random cars spawn parked in the parking area on the west side along Alta Street.

It plays a major role in the enhanced version of GTA Online, where it serves as an Office for Organizations as part of the Further Adventures in Finance and Felony update. It is purchasable on the Dynasty 8 Executive website for $4,000,000, and, as part of the Import/Export, can be expanded with an Office Garage, allowing access to the garage door located on the side of the ground floor.

The player can set up the SecuroServ network and begin Special Cargo, Vehicle Cargo and launch Special Vehicle Work. The office's helipad allows the player to quickly select an aircraft and immediately spawn mid-air above the helipad, or select a ground vehicle to be delivered outside, without the need to exit the building on foot. 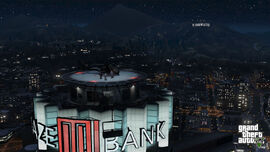 Top of the building and helipad at night. 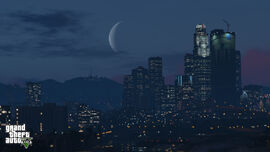 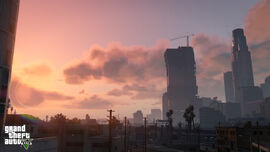 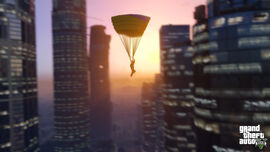 Parachuting through the heart of Los Santos, with the tower in view. (Xbox 360 & PlayStation 3) 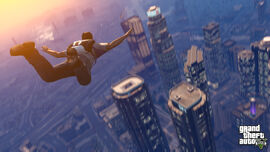 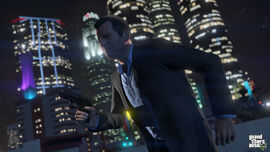 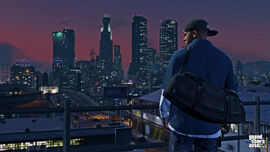 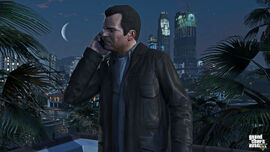 Maze Bank Tower at night with Michael in the foreground. (PC) 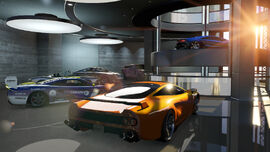 Official screenshot of an Office Garage inside the Maze Bank Tower (note the crane reflecting from the Mile High Club construction site) as part of the Import/Export update.
In-game

General view of the skyscraper.

Top of the building.