GTA Wiki
Register
Don't have an account?
Sign In
Advertisement
in: Pages with unsourced statements, Sports, Stadiums,
and 10 more
English

The Maze Bank Arena as seen from the northeast.

“Home to the Los Santos Panic basketball team, auditions for the hit reality talent show Fame or Shame - hosted by the celebrity who just won't go away, Lazlow - are also being filmed at the Maze Bank Arena.”
— GTA V Manual

The building is home of the city's basketball team the Los Santos Panic, and where the auditions for the reality show Fame or Shame are held. The stadium is presumed to have sold the naming rights to Maze Bank, which also owns the Maze Bank Tower.

In 2013, the Fame or Shame auditions took place here and it was advertised by several billboards and a digital display at the entrance, as well as the large digital sign found at Innocence Boulevard, near the Olympic Freeway. In 2018, the Arena War events took place instead, replacing every Fame or Shame advertising with Arena War ones.

The Maze Bank Arena is normally inaccessible and features a lowly-textured interior. In the mission Fame or Shame, the room is fully rendered with several decorations of the TV show. There are several ATMs and Vending Machines around the side, as well as closed grocery stores and several inaccessible doors. The only exception is the right side, where it leads to an underground "B" floor, where the auditions take place. This room consists of a studio where the show takes place on TV, as welll as what appears to be the editing room and the recreational area.

In the Arena War update, the stadium is accessible through the garage doors on the northern side along with a walk-in entrance. These lead to the Arena Workshop, with the garage doors allowing direct access to purchased basement garage floors. Here, the workshop owner is able to see the actual interior, appearing to be under construction for the next Arena War event (although the finished interior is only seen when participating at the Arena War mode, which varies on the game mode and setting). There is also a spectator box on one side of the building, which appears to be reserved for participants of the event.

In the mission Fame or Shame, Michael and Trevor travel to the arena in order to rescue Michael's daughter, Tracey, from the clutches of the perverted celebrity host, Lazlow. The two men chase him out of the stadium, but Lazlow manages to get into his red Dilettante and drives away from the car park, only to be pursued by Michael and Trevor in a stolen Phantom attached to a Fame or Shame trailer.

In the Arena War update for Grand Theft Auto Online, the player is introduced to Arena War, an internet show hosted by Alan Jerome, which consists of destruction derby-like Adversary Modes available to play inside the Maze Bank Arena. The missions focus around large arena setups with props, terrain and stunts. A huge selection of vehicles is present, including special variants of each, and a large amount of modifications available to apply to each variant. 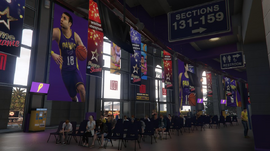 The main waiting room in the stadium. 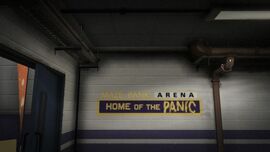 The "Home of the PANIC" logo inside the Arena. 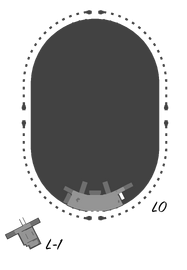