S_M_M_GenTransport (Pilot)
“A two-bladed, twin-engine helicopter, the Maverick was manufactured in Canada, but you shouldn't let that put you off. Originally designed for military use, when the army rejected them for looking too 'French', they became hugely popular with rich social climbers for exactly the same reason. Used by law enforcement for surveillance operations, you'll often see them hovering above inner city African American neighborhoods. Billion candlepower spotlight and loudspeaker optional, but trust us, it's fun to play with over poor neighborhoods at night.”
— Elitás Travel description.

The Maverick is a civilian helicopter featured in every Grand Theft Auto game since Grand Theft Auto: Vice City. It is manufactured by Western Company and Buckingham in the HD Universe.

The Maverick is one of the longest-recurring helicopters in the GTA series, appearing in all games since Grand Theft Auto: Vice City, with the exceptions being Grand Theft Auto Advance and Grand Theft Auto: Chinatown Wars. It has remained largely the same, being a traditional helicopter with capacity for four occupants and possessing relatively easy handling.

Between Grand Theft Auto: Vice City and Grand Theft Auto: Vice City Stories, the Maverick is based on a Bell 206L-4 LongRanger. It is depicted with a large fuselage, rounded nose and large windows, as well as long skids, tall engine compartment with a two-bladed main rotor, and a long tail boom with the corresponding stabilizers and four-bladed tail rotor. The interior of the aircraft has a bench seat for the rear passengers and two control sticks for the front occupants (although only the left occupant takes control of the vehicle).

All renditions of the Maverick followed an identical color distribution, consisting of a primary color for most of the fuselage and tail boom, and a secondary color in the form of dual stripes at the bottom. In Grand Theft Auto: San Andreas, the skids are painted with the secondary color.

In Grand Theft Auto IV, the Maverick retains the overall design from the Bell 206L LongRanger, but features a four-bladed main rotor, similar to the Bell 407.

The Maverick assumes an improved design and various changes, although it still remains similar to the previous renditions. Its fuselage appears to be much taller, and two small windows are added on the roof area, but the sections between the side doors no longer have extra windows. The skids are slightly shorter in height, and small details such as two vented sections and small exhausts are added to the engine compartment. Unlike previous renditions, the Maverick is depicted with sliding rear doors that are always open, and the rear passengers sit on the borders of the rear bay instead of on the rear seats. In addition to the aforementioned difference in rotor design (a two-blade rotor replaced by a four-blade variety), pre-release material also depicts earlier forms of the Maverick as having shut rear doors, as opposed to slid open doors in the final version.

The interior of the aircraft features a small flight instrument panel/console in the center and two control sticks for the front occupants (again with only the left occupant taking control of the aircraft), along with safety warnings.

The aircraft spawns in a white primary color for part of the fuselage and tail boom, with a variety of possible secondary colors applied on part of the skids. The nose of the aircraft bears "MAVERICK" stencils on each side, while the tail boom bears "DJO.250676" stencils.

The Maverick returns in Grand Theft Auto V and Grand Theft Auto Online, looking similar to its previous versions. However, it assumes a two-bladed main rotor like the Bell 206L LongRanger and different skids, similar to the ones from the Eurocopter AS350B.

The interior of the aircraft remains identical to its previous rendition, having a small flight instrument panel/console and two control sticks. In the enhanced version, the aircraft uses animated dials to display vital information, such as an altimeter (measured in ft), a compass (adjusted with the in-game compass), an airspeed indicator (measured in knots) and a vertical speed indicator. It also uses an attitude indicator, which denotes the aircraft's orientation relative to the horizon (which is also adjusted with the in-game indicator on the radar). This set is also used as standard across multiple aircraft.

The original livery design is replaced with a single-paint color design and a permanent livery with silver "MAVERICK" lettering on the engine compartment.

In most GTA games, the Maverick is offered as the first controllable helicopter and usually early in the game's story, probably because its balanced performance makes it easier to maneuver than other helicopters.

Overall, the Maverick is a good choice of transport, but is unsuitable for combat purposes, since it lacks armor, as well as an own set of weaponry.

In the 3D Universe, the Maverick is a short, nimble, basic helicopter. It has a high top speed, forward thrust is acceptable, and its maneuverability it on par with most competitors. Durability is rather slack due to its thin bodywork and overall 'light' design, making it unsuitable for long-time air pursuits or for purposeful crashing, as it can only take several crashes, and a small amount of bullets before it begins to smoke and break down.

The aircraft is powered by a single turboshaft engine.

A major improvement in Grand Theft Auto IV, the Maverick returns as a slightly bigger, more durable, and experimental vehicle. The Maverick is even faster and more maneuverable, largely due to the changes to the general handling of both land and air vehicles to GTA IV.

Durability is acceptable for its purpose, and thanks to its bodywork, can still take numerous beatings before it falls out of the sky.

Stability is rather disappointing. Even despite the 4-blade design, the helicopter has limited stability and cornering can be very unresponsive, and landing can be more trouble after slowing down or performing a quick turn or maneuver.

Again, the aircraft is powered by a single turboshaft engine.

The Maverick returns to GTA V and GTA Online with a major upgrade in its handling. Its top speed and take-off capabilities are still the same, however it is more rigid and can maneuver with ease, all despite its downgraded 2-blade system. It is also much more durable than the previous renditions; albeit with the exception of high-speed impacts resulting in an instant explosion, a property found on all aircraft in the game.

Like previous renditions, it is powered by a single turboshaft engine.

Upon being converted into a personal aircraft, the Maverick can only be repainted with a primary color. The livery cannot be removed, however.

The Maverick in the mobile version of GTA Liberty City Stories. Notice the vehicle exit button.

Beta Maverick as seen in "I'm Rich", a TV show in GTA IV.

A similar Maverick in a Weazel News program on television in GTA IV.

Warning message on the pillar.

Another warning message on the Maverick's dashboard.

One of the parachute jump Mavericks in GTA V.

An orange Maverick hovering over a pack of Deer in the PC version of GTA V.

Rappelling from a Maverick in GTA Online.

The Maverick on the updated Rockstar Games Social Club.

The Maverick in the cinematic preview on GTA V Rockstar Games Social Club.

The Maverick in the cinematic preview on GTA Online Rockstar Games Social Club. 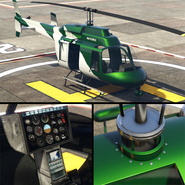 The Maverick on Elitás Travel.

The black Maverick approaching the player during "Caught in the Act".

The Epsilon Program variant of the Maverick.

The Maverick in Grand Theft Auto: Liberty City Stories is not intended to be obtained by the player. However, it can still be obtained by the player during the missions Calm Before the Storm given by Joseph Daniel O'Toole[1] and False Idols given by Ned Burner[2]. It is unusually fast and can reach high speeds in a matter of three seconds, which is not possible in other games (since it is somewhat scripted to be faster). Moving the camera moves the helicopter (because the right analog stick was to alternatively control a helicopter in GTA Vice City.) The blades are reused from an AI-controlled Police Maverick, and the blades render transparency incorrectly (e.g. with trees). 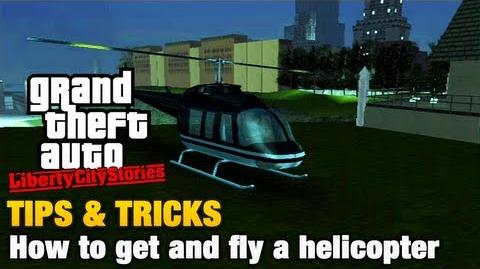 Variations of the Maverick