Duccio Faggella
“Salvatore... Sicily never wanted questo schifo di città; but when tributes dried up, what could we do? It was nothing personal.”
— Massimo Torini to Salvatore Leone.

A high-ranking member of the Sicilian Mafia, Torini is sent by his superiors under the supposed orders of making a truce between the three mob families of Liberty City: the Leones, the Forellis, and the Sindaccos.

Originating from the Italian-owned island of Sicily, Massimo Torini joined and became a powerful and high-ranking member of the Sicilian Mafia by the late 1990s, under the rule of Salvatore Leone's elderly uncle. It has been said that when he was younger he would often kill men with his bare hands. By 1998, Torini also became the owner of a hotel located outside the city of Palermo, Sicily. [1]

“...So, keep quei bastardi dei Leone tied down in Portland, and when my associates control this city, you'll be taken care of. Ci pensiamo noi.”
— Torini in a meeting with the Triads.

By 1998, Massimo and his superiors have learnt that Salvatore Leone - Don of the Leone crime family - was "out of control" when he returned to Liberty City after a visit to Las Venturas in 1992. Seeing this as an opportunity to take over Liberty City's underworld, Massimo is sent by his bosses under the guise of "bringing peace" between the three major Mafia families of the city, while in reality the Sicilians aim to manipulate the families into destroying each other.

Salvatore eventually learns of Massimo's incoming arrival in Liberty City, and correctly suspects that the Sicilians attempt to take over the city. First visiting Hepburn Heights, Torini meets up with members of the Spanish Diablos street gang, who ally themselves with the Sicilians in exchange of gaining aid in taking over Hepburn Heights.

Shortly afterwards, Torini meets up with members of the local Triad gang in Chinatown, Portland, striking a similar deal with them as he did with the Diablos. At that moment, the Triads spot Leone member Toni Cipriani spying on the meeting; Torini flees the area while the Triads unsuccessfully attempt to eliminate Toni.

Under Torini's influence, the Diablos wage a gang war against the Leones in Hepburn Heights, as well as the Red Light District, with the Leones successfully defending their turf. The Triads - presumably under Sicilan influence as well - blow up a Leone-owned warehouse at Callahan Point. Around the same time, the Leones, Forelli and Sindaccos continue warring for control over the city, as planned by Torini.

Confrontation with Leone and death

Salvatore: "Torini... It figures. Give him up! The mayor is mine! THIS CITY IS MINE!"
Torini: "Salvatore... Sicily never wanted questo schifo di città. But when tribute dried up, what could we do...? It was nothing personal."
Salvatore: "Nothing personal? After what you've put me through! I'm gonna tear your fuckin' heart out!"
—Salvatore confronts Torini.

Salvatore is eventually arrested under orders of the newly-elected, Forelli-influenced mayor Miles O'Donovan, who was elected after the Sicilans presented evidence of fellow mayorship candidate Donald Love's ties with the Leones. While Salvatore's detainment initially seems to weaken the Leones and strengthen the Sicilians, he keeps sending his man Toni Cipriani into missions involving defeating the other mafia families. When Salvatore is released, Torini attempts to assassinate him, sending his men after a Securicar containing the Leone Don; however, this attempt is foiled by Toni, who fends off the hitmen.

Ultimately, with the Forellis crippled and the Sindaccos gone, Torini attempts to make peace with the Leones, but Salvatore declines the offer as he wants peace only by his terms. Torini then kidnaps O'Donovan, and finds himself confronted by Salvatore and Toni next to Portland Rock's lighthouse. Torini tries to justify the Sicilians' actions as "nothing personal," but Salvatore threatens to kill him. Enraged, Torini attempts to escape and attacks back on his Maverick, but Toni destroys it, killing him and his men.

After Torini's death, the Leones and the Sicilians make a truce, with the Sicilian Don, Salvatore's uncle, conceding defeat and returning to Sicily. 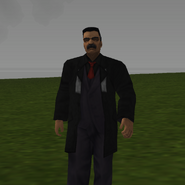 Torini in the PSP version of GTA Liberty City Stories.

Torini in the mobile version of GTA Liberty City Stories.