"Sophisticated, superior, class-obsessed and with more than a little aggression under the hood, this grand tourer from Dewbauchee is as classically British as they come. Race tuned special edition."
―Southern San Andreas Super Autos description.

The Massacro Racecar is essentially a Massacro with a racing livery, sharing the same design and features. The stock car can be modified further in Los Santos Customs, including the ability to respray the underlying color. The sponsorship decals, however, cannot be changed or removed.

The Massacro Racecar is painted with a primary colour for the body and the interior stitching, while the secondary colour is only applied on the "Roll Cage" modifications (basically, it follows the same colour distribution as the normal Massacro, but the secondary colour can be changed). The stock wheels share the same rim design as the ones from the Cheetah, being similar to the "Cheetah RR" high-end rims available at Los Santos Customs (albeit finished in black). The car is set to spawn in an orange colour with an orange line surrounding the rim, although this colour set is only available through the Content Creator.

The Massacro Racecar has the following list of sponsors on the livery: 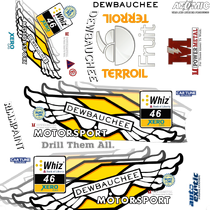 The Massacro Racecar's performance is greatly improved from the original Massacro. Although the top speed and mass remain the same, acceleration is improved upon, where the car vigorously shakes when setting off and reaches high speeds even quicker. The car's handling line is also improved on, and the car can corner with ease; even better than its competitor, the Jester (Racecar). Its heavy mass may seem to be an issue, but it helps the car stick down to the road and, unlike the Jester Racecar, avoids it spinning out when cornering with its improved steering radius.

The braking time is not altered too much, although the car seems more responsive to the brake pedal. The engine sound remains the same, being a very high revving, powerful V10 sound, with the engine model of a twin-cam four cylinder. The car holds a front engine, rear wheel drive layout.

* The Massacro (Racecar) is limited to only the Classic, Matte, and Metallic color options. All color choices keep the liveries on the car intact. 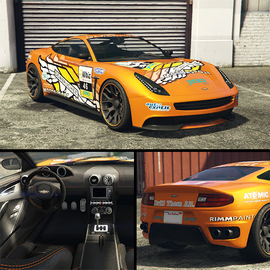 The Massacro (Racecar) on the Rockstar Games Social Club.

Retrieved from "https://gta.fandom.com/wiki/Massacro_(Racecar)?oldid=1258180"
Community content is available under CC-BY-SA unless otherwise noted.