“The true gentleman’s choice of sports car. Some are born with a silver spoon in their mouth. For others, it’s the keys to a Massacro.”
— Career Builder description.
“Sophisticated, superior, class-obsessed and with more than a little aggression under the hood, this grand tourer from Dewbauchee is as classically British as they come.”
— Legendary Motorsport description.

The Massacro is heavily based on the 2nd generation Aston Martin Vanquish, evident by the CFRP elements across the lower half of its front bumper. The upper front bumper duct is similar to the Corvette Stingray C7, while the bonnet scoop and the headlamps are inspired by the Ferrari F12 Berlinetta. The rear fascia design is similar to the Vanquish, although the lower rear end shows some resemblance to the Ferrari 360 and the Ferrari F430. Unlike all 21st century Aston Martin production models (excluding the Cygnet and V12 Zagato), the Massacro does not include chrome trim around its side windows or on any side formations, and also features a tall front quarter panel duct, unlike most Aston Martin models.

The Massacro is distinctive by the incorporation of carbon-fibre elements around it. The lower half of its bumper features carbon-fibre portions on the front quarters and a colored part on the centre, followed by a small grille with two carbon-fibre horizontal bars on it. Its small headlamps and vertical LED strips are located in carbon-fibre housings, while the bonnet displays the manufacturer emblem on the front.

The sides of the car are defined by the black front quarter panel ducts, with chrome details on them. A set of carbon-fibre skirts can be seen at the bottom. The overall shape and greenhouse area strongly resembles that of GTA IV's Super GT, with two rear-view mirror shells finished in carbon-fibre.

The rear end of the car features a panel between the tail lamps and the manufacturer logo in the mid upper area, giving it more resemblance to that of the Rapid GT. There are, however, big differences in the plate and exhaust area along with a more pronounced spoiler outline. The diffuser seen in the centre is finished in carbon-fibre.

The interior uses the same "Super GT" interior and dials from cars like the 9F and the 9F Cabrio.

The Massacro is painted with a single primary colour for the body and the interior stitching. The secondary colour, while unable to be changed, paints the "Roll Cage" modifications, which is only determined by the traffic colour sets (GTA V), the selected colour when purchased (GTA Online) and the special variants. The stock rims are identical to the "Obey RS" rims available in Los Santos Customs, albeit finished in white, the wheels are wider and the brake disks are a bit smaller.

The Massacro in short is an all around great performer, having exceptional braking, as well as the best top speed in its class rivaling the Zentorno and the Turismo R. Handling however, is where the Massacro falls short, as it does have trouble keeping grip at high speed turns, although in the hands of a skilled driver, this is not much of a problem.

The vehicle is stated in the website to have a 6-liter V6 engine capable of pushing 480hp. Its engine model, however, takes the form of a twin cam inline-4, coupled to a 6-speed gearbox in a front engine, rear wheel drive configuration.

A customised Massacro in a promotional screenshot.

The Massacro (middle), along with the Zentorno and Huntley S, in a promotional screenshot for the update.

The Massacro as seen in a pre-release screenshot. 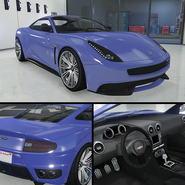 The Massacro on Legendary Motorsport.

The Massacro on the Rockstar Games Social Club.

3 heavily modified variants of the Massacro may appear in Vehicle Cargo source missions. Each variant has a unique license plate number, colour combination and different set of bodywork modifications.

A special pre-modified variant of the Massacro can be seen driving around Vinewood Hills randomly, sometimes parked inside garages. The following set may spawn only in story mode. The car appears heavily modified and pink in colour. 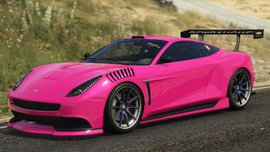 Pre-modified variants of the Massacro can be seen driving around Los Santos randomly. The following two sets may spawn only in story mode. The vehicles appear in set color sets with the same modifications. 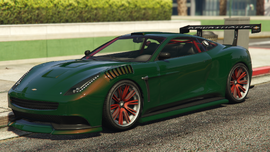 Like the randomly spawning modified Massacros, two sets of Massacros may spawn outside Los Santos Customs, pre-modified. These again only spawn in single player. The vehicles appear in set color sets with the same modifications. They will not spawn with any of the default extra components. These variants are named "LS_CUSTOMS_MODDED_SP" and use the exact same modifications and colors as the Business DLC Sports Modded sets. 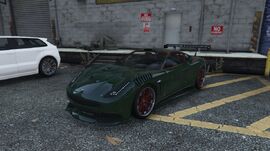 The Massacro is part of three vehiclemodelsets, "LS_CUSTOMS_MODDED_SP", "BUSINESS_DLC_SPORTS_MODDED" and "MASSACRO_DLC_MODDED". The first allows the Massacro, among other cars, to spawn outside Los Santos Customs heavily modified, and in other places around the city, the second allows the Massacro and Jester to spawn heavily modified in specific locations, and the last allows a unique modified pink Massacro to spawn around Vinewood Hills. They only spawn in GTA V.