View source
watch 02:56
Raise a Floppa - The Loop
Do you like this video?
Play Sound
For other characters with the same name, see Mary (disambiguation).

Dawn McGee
“No, I don't want to sleep with you, and no, I don't care that I'm thirty-nine and single. It doesn't worry me a bit.”
— Mary-Ann Quinn

Mary-Ann is a highly-strung fitness enthusiast who trains for foot and bicycle races as well as a triathlon. She comes across as extremely angry, but will deny that she is when asked. She often offers up personal information about herself whether or not she has been asked. She'll also talk about personal problems, and then dismisses her own concern, though clearly her tone and actions prove that these things bother her greatly.

She appears to be utterly disdainful of males and usually berates them with a string of verbal insults, whether warranted or not. She's also convinced that every male that approaches her wants to have sex with her, which she is quick to make clear will not happen. She doesn't want to get pregnant because she is afraid of getting fat.

When she meets Trevor for his side mission, she vehemently denies she has anything in-common with him when he begins to come on to her, but she actually shares many of his traits, such as irrational anger, no emotional control, and making no sense at times.

Mary-Ann is one of two Strangers and Freaks characters in GTA V to give missions to all three characters, the other being Barry.

Little is known about Mary-Ann's background. According to her Lifeinvader account, Mary-Ann is seeing a man named Adam, who was met through a blind date set up by her swimming coach. After two progressively worse dates, he is the man that Trevor assaults when he meets Mary-Ann, as she states in her Lifeinvader "I'm meeting up with Adam at Galileo Park near the Vinewood sign. I'm going to annihilate him on the bikes, see if I can locate a spine anywhere in that wimp!" Mary-Ann's mother is on Lifeinvader as well, but her profile is strangely titled "Mother" instead of her real name. Mary-Ann's therapist Dr. Wetherbrook is also on Lifeinvader, leaving a message on her page concerned about her not attending therapy.

She also states she's a Senior Vice President in her profile page and her Lifeinvader posts indicate she thinks very little of her subordinates.

She was planning to have a child via a surrogate.

It is very likely that Mary-Ann is possibly inspired by real life fitness trainer Jillian Michaels. Like Mary-Ann, Jillian is often known for shouting at the contestants who had her as a trainer on The Biggest Loser up until her departure from the show in 2013. They also share the same birth year.

Mary-Ann appears in three different Strangers and Freaks missions, each of them with one of the three protagonists. Each character's encounter is unlocked progressively later in the story but if the player has not met her by the time Trevor's meeting is unlocked, the following encounters can be completed in any order. The encounters are only accessible from 7 am to 8 pm.

Michael is able to meet Mary-Ann after Complications. Michael meets Mary-Ann while she is doing some exercises opposite the Von Crastenburg Hotel on Playa Vista in Del Perro. Mary-Ann gets angry at Michael, thinking that he is only speaking with her because he wants to have sex, and teases him, saying that she can beat him in a race any time. Michael accepts the challenge and they both run to the western carpak on Del Perro Beach. After Michael beats her, she tries to justify herself saying she is "tapering for a tri." She then hops on a Scorcher and goes away very angry. If followed, she rides random loops around the Del Perro and Morningwood areas.

Despite racing with all three protagonists, Michael is the only one she remains in contact with after the race friending him on Lifeinvader and sending messages to his page. Although their racing dialogue seems to imply that she enjoys his snide, self-deprecating humor throughout.

Franklin is able to meet Mary-Ann after Predator. Franklin encounters Mary-Ann at the end of Paleto Point in Paleto Bay. She is again found doing exercises and when Franklin approaches her she tells him to stop looking at her ass. Franklin replies that he was not looking, but her ass is a little "thin for his taste", but still nice. Mary-Ann teases Franklin to the point that they decide to compete against each other in a short triathlon finishing at the North Point Trim Track. Franklin beats Mary-Ann and says that it's not about winning but just competing. Mary-Ann says that it is always about winning and leaves on a Scorcher, again angry at herself. If followed, she bikes east along Procopio Beach.

Franklin mentions during his mission that she should hang out with his aunt Denise Clinton (presumably since they both share feminist agendas).

Trevor is able to meet Mary-Ann after Reuniting the Family. Trevor finds Mary-Ann in front of the broadcast station at the end of Mount Haan Drive in Vinewood Hills. Mary-Ann is found screaming at Adam who apparently wanted to break up with her, she says that she doesn't care about him and tries to make very clear that he is the one who is wrong in wanting to end their relationship. He doesn't say anything during the entire discussion, since Mary-Ann doesn't stop talking long enough to allow it.

The discussion ends with Trevor punching the guy in the face and declaring his love to Mary-Ann who he thinks is the love of his life. Mary-Ann says that if he wants her he needs to prove what he is capable of, they both hop onto bikes and begin to race down the hill to the junction of Marlowe Drive and Baytree Canyon Road. After Trevor wins the race, she tells him to go "spurt his genome in a gym sock" and rides away back north towards Mount Haan.

Mary-Ann appears in the following Strangers and Freaks side missions: 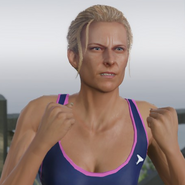 With Adam at Mt. Haan.

Riding away after racing Michael.