Chris Phillips
“The name's Chonks. Marty Chonks. I run the Bitch'n Dog Food factory around the corner. I got money troubles, but hey, who doesn't, right?”
— Marty Chonks to Claude.

Marty Chonks is a character in the Grand Theft Auto series who appears as a one of the mission giver by payphone in Grand Theft Auto III. Marty is a serial killer and the owner of the Bitch'n' Dog Food business.

At some point prior to 2001, Marty married his wife Mrs. Chonks (who is having an affair) and operated the Bitch'n' Dog Food Factory in Trenton, Portland Island, Liberty City. It is during this time that Marty ran into financial difficulty-- owing to his bank manager demanding higher interest repayments on his loans and his wife's extravagant spending. He also hires two thieves to burgle his home in order to collect on the insurance.

Marty Chonks, in an effort to sort out his financial trouble, eventually employs Claude to transport various people to his factory, and then destroy any evidence in the car, while Marty himself kills the people and turns them into dog food. Victims include his bank manager, two burglars and his wife, Mrs. Chonks. Marty then sends Claude to get Carl, who had been having an affair with Mrs. Chonks, who Marty believes he can overpower. Carl brings a shotgun and kills Marty, saying that he's there to take over the business. Claude has the opportunity to kill Carl after the mission, and see Marty's dead body before it disappears. 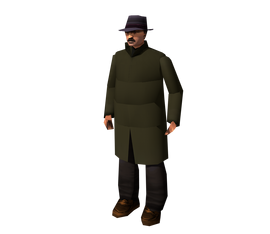 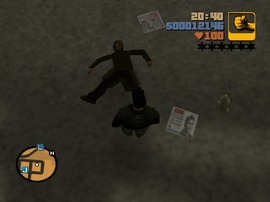 Marty Chonks' dead body in the mission "Her Lover".