Marty Boldenow is, in 2008, a criminal based in Liberty City.

He can be killed by Niko Bellic. When encountered at his hangout behind Lennies Fireproof Door Co. on Mueri Street in Acter (although the Police Computer incorrectly lists his hangout to be in Westdyke), he is accompanied by a group of Yardies.

He uses a Rocket Launcher during his confrontation with Niko. However, he will drop the RPG and instead use an AK-47 when the player gets close enough. 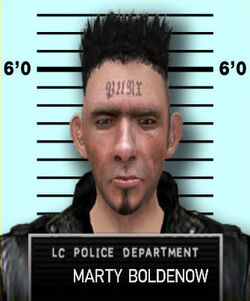 With his Jamaican associates.

Missing Niko with an RPG shot.

Switching to his AK-47 for close range combat.