Alfredo Huereca
“I love you... in an appropriate way I mean. If I didn't, you would be dead, of course.”
— Martin congratulating the GTA Online Protagonist after completing a mission.

The head of his own Mexican-American drug Cartel, Madrazo is a powerful and wealthy legitimate businessman settled in Los Santos with his wife, Patricia. During the events of Grand Theft Auto V, he forcefully hires co-protagonist Michael De Santa following an incident that cost him millions of dollars.

In both of his appearances, Madrazo was voiced by Alfredo Huereca.

“Man, Mr. Madrazo... Mr. Madrazo is a legitimate businessman. He was wrongfully accused of... running a Mexican-American gang and a narcotic ring, but the charges were dropped because of the witnesses came up... missing.”
— Franklin Clinton to Michael De Santa.

At some point in his life, Madrazo became the head of the most ruthless Mexican narcotic gangs in the Los Santos area. Due to his status, he has been summoned to several court cases involving his gang activity, but has not yet been convicted as any witnesses willing to testify were silenced.

Madrazo married his wife Patricia in 1983, and had a son not long after that. However, Madrazo mistreats her, and is having an affair with a Russian woman named Natalia Zverovna.

“Well, you're the talk of the streets, my friend. Can I call you that? I feel we will be great friends.”
— Martin, upon meeting the protagonist in person.

Following the first mission for Madrazo, the protagonist meets him in person, near his house. Afterwards, Madrazo starts giving the protagonist various missions, often asking him to eliminate rivals and other threats to his business.

Madrazo first appears when Michael De Santa and Franklin Clinton pull down his mistress' deck, which a tennis coach who had been cheating with his wife Amanda had been hiding on. Madrazo's mistress takes the phone from the coach, who is telling Michael that it was not his home that was destroyed, and Natalia tells the retired thief that Madrazo gave the "green light" (a hit) on him.

Franklin holds the hitmen off as Michael drives back to his mansion, but Madrazo appears soon afterwards. He sees Michael does not know him but Franklin does and he takes Franklin's driver's license and tells him to give Michael a background on him. Franklin complies by telling the retired thief that Madrazo was a "legitimate businessman wrongly accused of leading a Mexican narcotics gang" before the charges were dropped. Madrazo compliments Franklin's knowledge and beats Michael with a baseball bat, but, upon realizing the house's destruction was based on misguided retaliation, leaves after demanding Michael pay the $2.5 million necessary to repair the house to avoid any further retaliation.

Once Michael pays him reparations for the damages to the house, Madrazo shows some gratitude and is pleased that Michael kept his word.

A while later, Madrazo calls Michael for a job, driving to his ranch in Vinewood Hills. Also with Michael was Trevor Philips. Madrazo told them that he needed his cousin Javier killed because he was thinking of testifying against Madrazo, so he set up a turret in the hills, which would be used to shoot Javier's private plane down.

Afterwards, Trevor returned to Madrazo's home with some sensitive files retrieved from the plane wreckage and immediately demands payment for 'an honest day's works'. When Madrazo refused to pay him, he 'kinda got a little angry', cutting Madrazo's ear off before stealing his wife, whom he developed a crush for, and his car, then driving off to his trailer, where he and Michael hid for a short time.

In order to prevent Madrazo from killing him and Trevor, Michael retrieved an Aztec fertility statue from a sunken container and gave it to him as a peace offering (knowing that Madrazo was fond of such artifacts, having seen several of them in his house). Madrazo's wife is returned to him, but Trevor threatens to kill him if he ever mistreats her again, to which Madrazo agrees and claims he and Trevor have the kind over friendship that involves both men doing whatever necessary to avoid antagonizing each other. After this point, Madrazo is not heard from again. However, his wife will make two phone calls to Trevor, each time speaking to him only briefly before saying she has to go because Madrazo is coming.

In 2018, as part of the Southern San Andreas Super Sport Series update, Madrazo hires the GTA Online Protagonist once again to assassinate some targets including traitors, one of his dealers and closest associates.

In late 2020, the Madrazos were having some disagreements with one of their main suppliers, the Colombian narcotrafficker Juan Strickler, better known as "El Rubio", who managed to get hold of intel on the family. Strickler threatened to leak the information to the DEA if the Madrazos would not renegotiate their prices. With Martin's son Miguel in charge of getting the intel back, Martin recommended that he contact the GTA Online Protagonist for the job.

Eventually, the players manage to liberate the documents from Strickler and give them to Miguel. With the evidence now back in their hands, he calls Martin to inform him and attempts to persuade his father into following up on some deals and projects of his, only to get promptly hung up on.

Madrazo is often described as a psychopath because of his short temper and his ruthless methods of dealing with people who cross him in any way, shown when he has Michael assassinate his cousin Javier Madrazo. Despite this, he shows gratitude to Michael when he paid for the house and despite their rocky beginnings, Madrazo trusted Michael enough to employ him. However, unlike typical rich psychopaths who would often prefer to maintain a positive image, he prefers instead to openly and constantly remind people around him of his psychopathic traits, and enjoys making people, even those closest to him, fear him. He also appears to be misogynistic, as he mistreats his wife and has had several affairs with other women. Despite that, he was angry when his wife was kidnapped by Trevor and wanted her returned to him. However, he's also shown to be terrified of people who can match his psychopathic tendencies, shown when he tells Trevor that he'll go to great lengths to avoid contact with him after Trevor threatens him with retaliation should he ever mistreat Patricia again.

Madrazo seems to respect people who respect him back, as seen in GTA Online, where he will be friendly towards the player and call them his friend if the job he gave was completed successfully. Not doing a job for Madrazo in GTA Online for a period of time will result in angry phone calls from him. 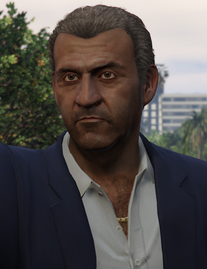 Martin in the original version of Grand Theft Auto V.