Standard White - 100%
“Classic American automobile-meets-Monster truck - meet the Marshall. Select from 25 available livery and flag combinations.”
— Warstock Cache & Carry description (Before the Heists Update)
“A Cheval pickup's body with monster truck suspension and wheels. It's like having your husband's wallet and your best girlfriend's body and mind. Or just a monster truck. Comes with a beer holder, 'cause the cops ain't pulling you over.”
— Warstock Cache & Carry description (After the Heists Update)

The vehicle is exclusive for players who have played the original PlayStation 3 or Xbox 360 versions of GTA V and play it again on the PlayStation 4, Xbox One or PC versions.

It was later made available for all players in Grand Theft Auto Online, although returning players can still acquire it for free.

The Marshall is basically a Picador on top of a custom monster truck chassis. The main body retains most of the design and features from the regular Picador, but it has a mostly stripped-down interior, the rear window and the rear bed are removed, and two door handles are added on the skirting area of the body. In addition, the whole front section serves as an openable compartment for the frontal section of the chassis.

The entire chassis is identical to the Liberator, sporting a tube-frame chassis to maintain the truck's integrity on hard hits, with quad shock towers and sway-bars to maintain the truck leveled. The truck also appears to have four torsion bars or kicker braces, which run from the center of the metal chassis down to the suspension lever arm. The interior of the vehicle is similar to the Liberator, with the main dials being mounted on small frames.

The Marshall is painted with a primary color on the body, while the secondary color is applied on the chassis and in the form of dual stripes passing through the hood, roof and tailgate. It shares the same unproportional off-road wheels as the Liberator, which is a monster derivative of the "Mudslinger" off-road wheels seen in Los Santos Customs, albeit using custom tire markings also present on regular off-road wheels as an option in mod shops.

Just like the Parachute, the Marshall comes in 25 livery and flag combinations, where each color corresponds with a country. The countries are as follows:

In comparison to the Liberator, both have nearly identical performance, with the only exception being that the Marshall has marginally better handling (as evidenced by statistics bars). However, the top speed on both vehicles is sub-par, making handling not much of a problem, and thus making both vehicles essentially perform the same. Also, the four-wheel steering ability is also present.

Much like the Liberator, the Marshall houses a high-output supercharged V8, powering the four wheels in a 20-80, front to rear torque distribution through a 3-speed gearbox. It also shares the high-output and roary engine sound from the Liberator.

Promotional screenshot of the Marshall.

The Marshall on the updated Rockstar Games Social Club.

The Marshall in the cinematic preview on Rockstar Games Social Club.

Comparison with the Liberator. (Rear view) 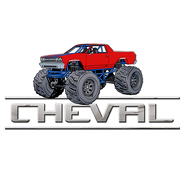 A Marshall on a texture file for one of the Special Tops added in the Arena War update. 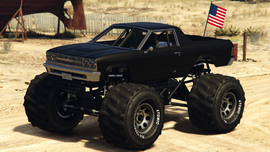 The Marshall used in this mission. (Rear quarter view)