In-game time
“Michael's marriage is on the rocks.”

Michael: "It's a foolish man who builds his house in sand, baby."
Franklin: "I don't think my boy Matthew was thinking trucks when he wrote that shit."
―Michael and Franklin after pulling Madrazo's house off the hills.

Michael comes home, calling for his wife Amanda. He steps out of the house and becomes suspicious when he notices two tennis rackets by the door. He confronts Amanda when he walks to his room and he finds that she is cheating on him with her tennis coach, Kyle Chavis. Kyle attempts to reason with Michael, but he is too furious, so Kyle jumps out of the window. Shortly after, Franklin arrives and helps Michael track down Kyle.

The two leave in a "borrowed" McGill-Olsen Bison and chase Kyle on the road, losing him briefly only to find his car outside of a nearby house. Michael threatens Kyle as he is hiding on the deck. Franklin then ties the truck's cable wire winch onto the deck's support beams. Michael and Franklin get back inside the truck and Michael accelerates, causing the support beam to buckle and the entire house to collapse and slide down the cliff.

As they drive away, Kyle calls Michael on his cellphone and tells him that the mansion he destroyed wasn't his, it was the home of a powerful gangster's mistress. The mistress then tells Kyle to give her the phone, and then tells Michael that Martin Madrazo gave him a "green light" (a hit).

Michael and Franklin manage to hold off the goons sent by Martin and make it back to Michael's mansion, but are cornered by Martin himself and a couple more of his goons, along with his mistress. Martin has Franklin tell Michael about when he was "wrongfully accused of running a Mexican-American gang and a narcotic ring", with the charges against him ultimately dropped because the witnesses "came up missing". Shortly after, Martin hits Michael with a baseball bat, and demands that Michael pay for the damages he caused. Michael agrees while Martin tells him that the rebuild will be somewhere in the $2.5 million range. Afterwards, Martin and his goons leave. With no choice, Michael proclaims his return to the life of crime.

"One of the famous hillside stilt houses of Vinewood came crashing down to earth yesterday in an incident that has police claiming foul play. The house, which is registered to a Mexican holding company, fell down the hillside. Some eyewitness reports claim they felt some kind of local earthquake, while others said they saw two men trying to pull the house down. Insurance investigators have been at the site since this morning trying to figure out what happened. One told us "we will figure out what happened". Stilt houses, mostly built in the late 1950s and 1960s have been popular stops on Los Santos architecture tours, and this home, designed and built by legendary émigré architect Tueton for his Finnish movie star mistress, was considered a particularly fine specimen. Rebuilding costs are estimated at between one and three million dollars."

A house collapses in Vinewood Hills. A Vinewood Hills Stilt Home designed by famous architect Tueton, collapsed. Seismologists did not notice any unusual activity, and the house passed inspection just last year. Malinda Manchester is at the scene. This homeowner is obviously distraught. "Leave me alone. I don't want to talk to biased American media." We'll stay on this story.

Michael catching Amanda having an affair with her coach.

The coach leaping through the window.

The coach jumping off the balcony.

Michael and Franklin setting off to find the coach.

Losing the coach and having to search for him.

The coach up on the balcony.

Michael arguing with the coach. Franklin grabbing the winch.

Michael starting to pull the house down.

Michael pulling the house down. 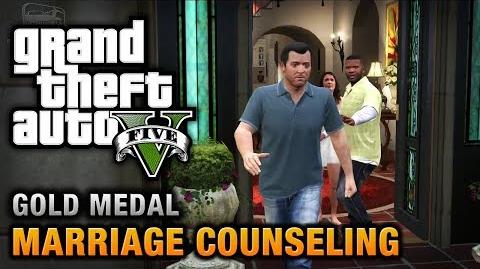 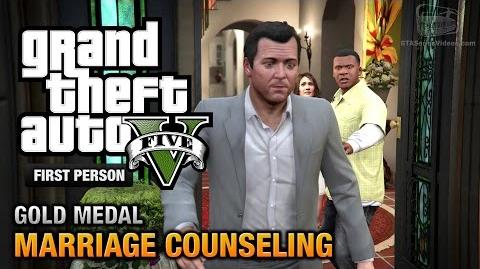 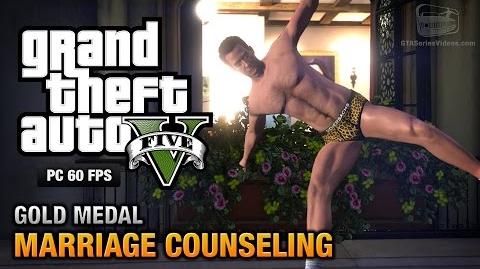