GTA IV
“The Marquis is the perfect blend of traditional elegance and modern decadence.”
— DockTease description.

The Marquis is a long single-hull sailboat with a Bermuda rig and a propulsion motor in the rear, features that have not changed much since its introduction. Despite its design, the ship's sails are of no practical use as they are down and completely rolled up.

From Grand Theft Auto: Vice City to Grand Theft Auto: Vice City Stories, the design as a leisure sailboat remained the same, having a long hull and the captain' steering wheel on the back, where the player stands in front of it and controls the boat, similar to the Dinghy. There is an open side in the aft section to facilitate the player entering it.

Its only advantage is to be able to carry a lot of people, which is of little use, unless if in multiplayer. Also, it can be used to transport large gangs in GTA San Andreas, but other, smaller boats can also easily carry eight people, like the Reefer, Tropic or Coastguard.

The Grand Theft Auto IV rendition of the Marquis sports a more luxurious design with additional living quarters underneath the mast. It is based on Adjutor Yachts, seen heavily in both the bow and the stern of the yacht, as well as the quarterdeck. The Marquis' prow is not as long as the Adjutor, but the side rear windows and portholes are almost identical in shape.

In comparison to the former's blocky design, the updated rendition is sleeker and modernized, complete with a wooden floor, a detailed interior and a redesigned captain' steering wheel, as well as the addition of a seat and a redesigned aft section for access. On the rear of the boat is a small quarterdeck, shortly followed by the bridge. The Marquis features a large helm and now bears both the jib and the mainsail, the latter of which is hooked onto the boom via one clew and one tack. From the masthead are two shrouds on either side, two backstays and one slightly thicker headstay, which ties down just behind the pullpit. The boat also sports a large keel underneath, which can be seen when "jumping" the boat.

Similar to previous games, the sails are simply for decorative purposes, and serve no practical use. They are always folded within the mast.

The Marquis in Grand Theft Auto V and Grand Theft Auto Online remains identical to the GTA IV iteration, but sports an updated color scheme; the hull now can have the bottom side and a stripe of a secondary color.

The boat may spawn with either two sails attached to the mast, or with no sails at all. The sails may flutter loosely in the wind, but they do not move the boat in any way. Unlike previous games, the Marquis' mast is solid and will not be able to pass through solid objects.

While it is one of the largest boats in the games and common in various locations, the boat is significantly slow (due to its underwhelming motor) and has stiff controls. The Marquis' low speed makes it a terrible option for getaways, where the police Predators are chasing the player. The boat is distinguished by its resistance to collisions and is very stable, considering the heavy weight.

The Marquis remains as one of the slowest boats in the game, though the changes on controls makes it less heavy than in the 3D Universe. The boat can reach moderate speeds and its handling seems to be improved, but it is still a poor option for wanted levels, as the police Predators will catch the player easily.

As one can expect, the boat's weight will allow the boat to push other smaller boats with no efforts.

Its performance remains unchanged from GTA IV and still remains one of the slowest boats in the GTA Universe. However, it is slightly more responsive and does not take a while to change direction or reversing the boat. Because of its slow speed and heavy weight, the Marquis does not suffer easily when travelling through waves.

Because of the mast, the boat cannot pass low-level bridges easily.

In GTA SA, the Marquis can spawn with or without a dodger. The Marquis shown here in the foreground has a black dodger; the one in the background has none.

The Marquis on the updated Rockstar Games Social Club. 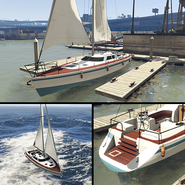 A Marquis sails down in a river during a beautiful morning in Los Santos.

The older wooden Marquis at a desert farm in GTA V.

There are Marquis' props at the Grand Senora Desert:

The Marquis is usually one of the most common boats in each game. It can be seen either navigating through the city's waterways and docked in several docks.