Reyna de Courcy
“I was lost. I sold myself. I took drugs. I was in conflict. Then I discovered an incredible truth. A truth so incredible, that if I told to you now, you would melt into nothingness.”
— Marnie Allen

From then on she turned to panhandling to support a 5-a-day habit, and had to return to prostitution when it increased again. She was arrested in 2006, for petty theft and prostitution, back when she worked for a Peruvian pimp in Acter, Alderney. She was arrested a third time in 2007 for heroin possession, and after refusing rehab she was released onto the street.

In 2008, Marnie is strung out on a park bench in a small park at the corner of Liberty Lane & Diamond Street, City Hall, Algonquin.

When Niko comes across her, she begs for money and/or drugs, and offers a lot of herself for next to nothing. She's young and has fallen victim to the streets. Niko feels sorry for her and agrees to take her to her dealer for a fix. Upon arriving at her dealer on Boyden Avenue, Niko gives her $500 and sees her off.

The second time Niko encounters Marnie, she is in Varsity Heights leaning up against a lamp post on a street corner, one block north of Bernie Crane's apartment. Marnie explains to Niko that she has "screwed over a john" and now thinks he is going to kill her. Niko, again feeling sympathetic, agrees to take her to Grand Easton Terminal train station, to flee the city to live with her parents in the Midwest. As Niko bids her farewell, he gives her $500 and tells her to look after herself.

Marnie later e-mails Niko, revealing that she is currently attending college to become a psychologist and is living happily back home with her parents. If Niko answers positively, he will tell her that maybe she "can help crazy people like me."

In 2013, Marnie has moved to Los Santos. The advice Niko gave to her in the years prior had somewhat stuck and she's become a regular member of the Epsilon Program.

According to her Bleeter account, part of her duties in the Epsilon Program is to sleep with gay movie stars to convince them they're straight.

She first makes contact with Michael De Santa after the completion of the mission Seeking the Truth when she sends him an e-mail asking for a $500 donation to the program. Tithing the money unlocks the mission Accepting the Truth where she appears for the first time and introduces herself to Michael as a guide through the Epsilon Program. Afterwards, she sends e-mails asking donations in money to continue the program and also cars that need to be delivered in a garage in Rockford Hills.

She later introduces Michael to Jimmy Boston, an actor who is also in the program. Both accompany Michael when he tries to find "alien artifacts" hidden in the desert. Her last appearance in person in the game, happens in the mission Exercising the Truth, where she says that Michael needs to run 5 miles through the desert to complete the program.

Regardless of the decision, she will send texts containing clues to the location of the tracts. This suggests that, while Cris is clearly a con artist, Marnie is a true believer in the program.

In late 2021, during the events of GTA Online: The Contract, cannabis has become a legal commodity. Seeking ways into the industry, Marnie and Jimmy get in touch with Lamar Davis, a well-advocated weed dealer. Despite the request for a discreet, off-the-books meeting, Lamar blatantly boasts about it on social media and accidentally leaks crucial details regarding the exchange; specifically by photographing himself at the rendezvous while finalizing the meet and uploading it (along it's metadata) to Snapmatic. The Vagos, who have been in a dispute with him and his associate, Franklin Clinton, disrupt the deal as it transpires and unsuccessfully attempts to kill Lamar, who warns the pair to flee to safety. He ceases contact with the Epsilonists following the deal, who in reality, simply wanted to re-brand his business to their own liking.


- Believed to be working as a prostitute to support heroin addiction.
- Refused to enter rehabilitation program on first arrest and was released onto street. 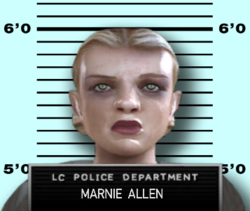