View source
watch 02:56
Raise a Floppa - The Loop
Do you like this video?
Play Sound
Not to be confused with Marked Man, a mission in Grand Theft Auto III.

Vic: "I think we've both outgrown our usefulness to Martinez."
Phil: "Jerry wants us dead? Shitting asshole! I'm gonna lay low for a while. I reckon you should too."
Vic: "Screw that! I ain't hiding from that piece of shit!"
— Victor Vance and Phil Cassidy after being betrayed by Jerry Martinez

Victor goes back to Phil's Depot looking for more work from Phil. However, Victor finds Phil with Jerry Martinez, who no longer trusts Martinez. Martinez says that in order for Phil to get more work he needs to trust him and check out his merchandise in a warehouse in Little Haiti. Phil decides to do the job, hoping for more work, whilst Victor decides to go and help Phil in case Martinez tries to kill him.

Victor drives Phil there in Phil's Walton, which still has some Boomshine on the back. They arrive at the warehouse and are ambushed by some of Martinez's men. After killing them, Victor and Phil escape. They are continually chased by Martinez's men whilst Phil attempts to ward them off using his Boomshine as a Molotov cocktail. They make it back to Phil's Depot and Phil decides to go into hiding for a while. After this Vic cuts his ties with Martinez.

Martinez: You and Phil are still on my shit list.
You'd better leave town while you can...

Louise: Can you come over? We've got trouble with Marty...

There is no reward for completing the mission, but the mission D.I.V.O.R.C.E. is unlocked.

Phil Cassidy and Victor Vance in a Walton about to ambushed by Jerry Martinez' men.

Phil throwing Molotovs at the attackers. 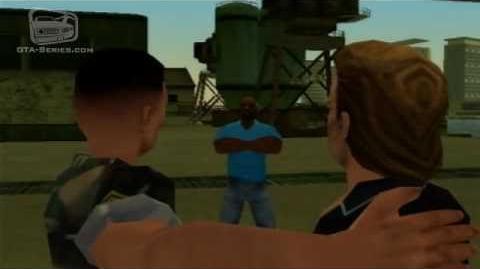