Debi Mazar (GTA III / GTA SA)
Fiona Gallagher (GTA LCS)
“Yeah, yeah, yeah! I'm sure your new lap dog has everything covered, and isn't he big and strong?”
— Maria Latore to Salvatore Leone about Claude.
“C'mon Toni, don't be so square, besides, he gets me this great speed, you know? A girl needs a lift. Plus it makes you really wild in bed.”
— Maria Latore to Toni Cipriani about Wayne.

Maria is the wife of Leone Family's boss Don Salvatore Leone and step mother to his son, Joey. She is voiced in GTA III and GTA San Andreas by Debi Mazar, whilst in GTA Liberty City Stories she is voiced by Fiona Gallagher.

Maria Latore was born in an unknown location, quite possibly in Liberty City, telling by her heavy Libertorian accent, and later moved to Las Venturas and became a waitress at the Mafia run Caligula's Palace casino. Later, she meets and begins a relationship with Leone Don Salvatore Leone. At some point between 1992 and 1998 she marries Salvatore and moves into his home in Liberty City, before moving out into her own apartment in the same district.

In 1998, Maria and Salvatore's marriage is at rock bottom with the two not getting along and living separately, whilst Maria has become addicted to drugs.

By this time, her relationship with Salvatore was all but degrading, as she was even willing to reveal information about his operations to Ned Burner in exchange for money.[3] She had also begun to cheat on Salvatore with various men, including Liberty City Bikers leader Cedric "Wayne" Fotheringay, something that Salvatore is well aware of and often uses in arguments. She attempts to sell Leone Family secrets to Ned Burner through e-mails, although the two never reach an agreement on a price. Toni Cipriani is assigned to chaperone her, often resulting in Toni rescuing her from trouble, including: helping her after she robs some stores, 'winning' her in a street race, killing Fortheringay after he attacks her, and saving her life after she overdoses. She shows romantic feelings toward Toni, who constantly declines her requests, although it takes a realization that Toni has no money before she decides to stay with Salvatore: "I'm Salvatore's girl! He's loaded! Don't you ever hit on me again!"

In 2001, she remains married to Salvatore Leone and has seemingly moved back in with him, although their relationship is still at rock bottom, with Maria only remaining with Salvatore for his money. She is introduced to Claude, who she calls "Fido", by Salvatore who asks him to look after her for an evening. Maria, who is still addicted to drugs, has Claude take her to drug dealer Chico who deals in Chinatown, who informs her of an illegal party at a warehouse in Atlantic Quays. Claude takes her to the party and successfully manages to return her to Salvatore's home after being chased by the Liberty City Police Department. Maria later tells Salvatore that she and Claude have entered into a relationship, resulting in Salvatore attempting to kill Claude with a bomb-laden Cheetah. Maria, however, pages Claude and has him meet her at a small dock in Callahan Point. She introduces Claude to her old friend Asuka Kasen and the three flee to Staunton Island.

Asuka later hires Claude to kill Salvatore, resulting in Maria becoming a widow. Maria and Asuka engage in various activities such as going on a holiday to avoid a paparazzi and shopping. Maria and Asuka eventually torture Miguel together to extract information about the Colombian Cartels operations. Catalina, however, assaults Asuka and Miguel, kidnapping Maria and taking her to Shoreside Vale, demanding Claude to pay a $500,000 ransom. Claude pays the ransom at the Cartel mansion in Shoreside Vale, but is betrayed by the Cartel, who, after taking Claude's money, attempt to kill him. Claude defends himself and escapes the mansion grounds, before following Catalina to Cochrane Dam, destroying her helicopter and rescuing Maria.

As the mission The Exchange ends, Claude and Maria begin to walk away from the scene with Maria talking non-stop about their relationship and the way she looks as the screen fades to black. Once the scene has faded fully to black, a gunshot is heard, after which Maria stops talking.

Rockstar Games' official response to fan questions about the incident in 2009 was that "Certainly gun shots were fired but nobody is sure as to exactly what happened".[4] For the 10th anniversary of GTA III in 2011, Rockstar gave another response regarding Maria's fate by stating that "We're not sure about this. Some think he did, and some think he didn’t".[5]

Maria is portrayed as ditzy most of the time, as well as snarky, a nymphomaniac and particularly spiteful and strained with Salvatore, although there's a significant differences in personality in Liberty City Stories and III, implying she has slightly mellowed over the years.

In Liberty City Stories she is shown to be immature, greedy, obnoxious, selfish and is secure about her looks, although she has no control over herself, using drugs (and at one point almost overdosing) and spending a lot of Salvatore's money. Despite her ability to get money, she also shoplifts, leaving the trouble to either Salvatore or Toni Cipriani. She is also very dominating, a nymphomaniac, a man eater, a gold digger and perceives Salvatore's most trusted henchmen as lapdogs that do her bidding, calling them "Fido" (as is the case with Claude in GTA III and Toni Cipriani in GTA Liberty City Stories).

By the time of GTA III, she's more down to earth and friendly, but not without her above mentioned snark and spitefulness towards Salvatore. Despite this, Maria still has the decency to save Claude from a death trap, as well as apologize and own up to what she did. It also seems she might have real feelings for Claude as she doesn't have any apparent greed or wanting his money as she did her previous affairs. She makes the claims that she wants to leave the mob life behind, although she and Claude do defect to the Yakuza with her friendship with Asuka Kasen. She may have a slight sadistic streak as she happily helps Asuka torture Miguel for information, simply because she was bored and wanted to keep her company.

Maria in the original version of GTA III.

Maria in the original version of GTA San Andreas, as a waitress at Caligula's Palace, Las Venturas.

Toni Cipriani about to drive Maria to a shop during Shop 'Til You Strop. 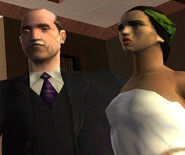