Sarah Clements
“I'm sorry we can't be together. You can't have me.”
— Margot to Luis Lopez.

Margot was a character in the Grand Theft Auto series who appeared as a random character in The Ballad of Gay Tony.

Margot dated Luis Fernando Lopez at some point during 2007. Luis ended the relationship when he revealed that he didn't want to marry her. Afterwards, she stalked and became obsessed with him. Her father told her that Luis was a bad influence, but her crazy mental obsession with Luis made her send constant e-mails, phone calls, and gifts.

She is encountered on the streets by Luis in front of Hercules (although it is implied that she waited there for him) and, after stressing him out about his denial of her constant gifts, tells him that she took 37 painkillers and 15 sleeping pills. Enraged, but still worried for her safety, Luis rushes Margot to the emergency room of the Lancet-Hospital Center to have her stomach pumped.

Upon release from hospital, she is once again encountered at Pier 45 holding onto a handrail and ready to jump from two stories, claiming that Luis would save her if he loved her.

Before jumping, Margot damns Luis' debaucherous lifestyle and holds a suicide note stating that he is responsible for her death.

“He pushed her! I saw it!”
— A female pedestrian about Margot's death.

Luis pleads with her that she wouldn't kill herself for him and attempts to stop her, but she leaps out of his reach to her death. A crowd of civilians surrounding the pier believe that Luis pushed her (ironically, bringing her suicide note to fruition). Luis, however, manages to escape. 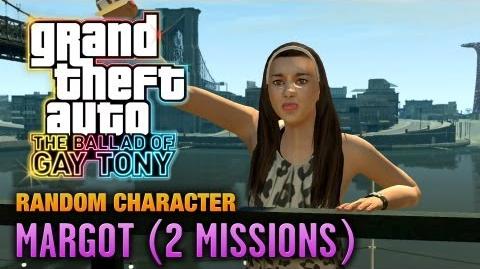 Margot about to commit suicide. 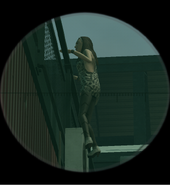 Margot viewed using a sniper rifle from below.

Margot's dead body after falling down.