"Bout time Alderney got some representation in the city."
―Marco Bonnaro to Jimmy Pegorino.

Upon arriving at the DUDE Chemicals plant in Acter Industrial Park, Big Pete and Marco accompany Pegorino to the meeting point while Niko watches from a building. After a short wait, Pavano hitmen assault the trio; Pegorino is wounded, but survives while Big Pete and Marco are, unfortunately, killed. 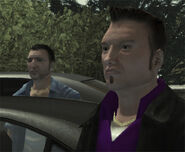 Marco Bonnaro (right) alongside Peter Marchetti during the beginning of "Pegorino's Pride" in GTA IV.
Add a photo to this gallery
Retrieved from "https://gta.fandom.com/wiki/Marco_Bonnaro?oldid=414673"
Community content is available under CC-BY-SA unless otherwise noted.