The Willard Marbelle is a four-door sedan featured in Grand Theft Auto IV.

The Marbelle's styling is blend of 1970s/1980s (North American) Ford Granadas and Lincolns, with various influences from the Dodge Diplomat. The car's headlights and turn signals somewhat resemble a 1977–1979 Lincoln Versailles, but the taillights are much closer to those of a 1981-1989 Lincoln Town Car. The Marbelle features a Door Ajar Chime.

The sides, front bumper, windows and roof pillars resemble those of the 1975-1980 Ford Granadas (these are also very similar to the 1977/1978 Lincoln Versailles); there are also vents surrounding the headlights much like those from the 1975-1977 Granadas.

Despite not appearing in the game, police scanner audio files contain the Marbelle as one of the many model names.[1]

The Marbelle's performance is above average on comparison to other vehicles in its class. It has a large modeled V8 engine driving the rear wheels, which is smooth, quiet yet rather powerful. Its performance is comparable to the Emperor, though its marginally smaller size and better suspension results in superior handling and a little less body roll. The Marbelle has slightly higher ground clearance than most cars in its class, and as a result copes well with hills, bumps and curbs. However, turning on a steep curb at high speeds can flip the car. The car's heavy weight makes it a danger for other vehicles at extreme speeds; a head-on crash with a speeding Marbelle can set the other car alight. Performance-wise, the Marbelle is a good performing sedan.

Based on what the files state, the Marbelle would have nearly identical stats as it did in Grand Theft Auto IV, but its mass was increased (2,100 kgs) and had a 4-speed transmission.[2] 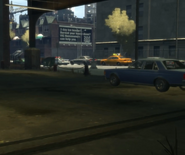