Manny Escuela is a Puerto Rican-American who grew up in South Bohan. It is implied that he is a former member of the Spanish Lords and a former heroin addict, but is now clean and has changed his ways. He claims that he owes too much to the "streets" and wants to clean them up to settle his debt to society. However, he has also hired a cameraman, Jay Hamilton, to film his righteous undertaking, leading many to believe that he is only interested in fame and glory. He operates out of the West Bohan Community Center where he runs a youth outreach program, and is also a dance instructor.

Manny is eventually introduced to Niko Bellic by his childhood friend, Mallorie Bardas. Rather than personally clean up Bohan himself, Escuela pays Niko, who needs the money, to do the dirty work for him. Niko drives around town exterminating drug dealers at the request of Escuela, who arrives afterwards, with a camera crew, to take credit. In an attempt to make his show more believable, he meets corrupt cop, Francis McReary, who appears in one of Escuela's videos. Later, Niko kills some of Manny's former friends.

Escuela was well known in South Bohan, but generally disliked by most. Even Niko is beyond irritated by Escuela's antics and ridiculous claims. Escuela even goes so far as to take credit for the creation of rap, despite his obvious lack of skill, and implies he refused to continue because of his distaste with commercialization.

Escuela's annoying habit of filming finally pushes the limits when he attempts to film a confrontation with another "community leader" of sorts, drug baroness Elizabeta Torres. Niko visits Elizabeta, but Manny and Jay arrive to tell her to stop selling drugs. With the police closing in on her operations, she is in a paranoid, cocaine-fueled state, and immediately shoots both Manny and Jay. She then asks Niko to deliver the bodies to a black market organ dealer, who states the organs will help a lot of people. Niko says, "He'd been trying to help the streets his whole life... maybe he'll be actually doing it now."

Manny Escuela is a vigilante who attempts to stop neighborhood crime by himself, particularly gangs and drug dealers. However, it's evident that he cares far more about fame and notoriety, rather than his cause, evident in how he often hires Niko Bellic to kill gangbangers and drug dealers for him before taking credit for Niko's work.

Manny comes off as a very egotistical man, going so far as to compare himself to Jesus Christ, calling his film the "gospel of the streets" and claiming that Jay should be filming him every second. He also claims to Niko that he created the rap music genre.

Manny also cares a lot about his appearance and is somewhat homophobic as well. He is often concerned with "looking gay" on live TV, and once even hired Niko to kill some of his former associates simply for calling him a homosexual.


- Former member of the Spanish Lords
- Reinvented himself as a community leader and started a youth center. 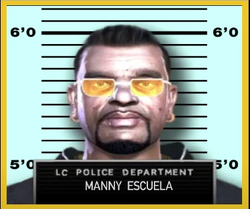 Manny having a conversation with Niko.

The corpses of Manny and Jay. 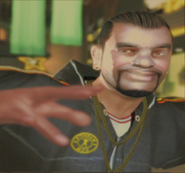 A photo of Manny which can be found in the Community Center.