The Manhunt Wiki has an article on:
Manhunt series

Wikipedia has an article on:
Manhunt (video game series)

WikipediaManhunt is a stealth, horror-survival videogame series developed by Rockstar North and published by Rockstar Games. The first game, Manhunt, was originally released for the PlayStation 2 on November 18, 2003. The game was later released on the Xbox and PC on April 20, 2004, and its sequel, Manhunt 2, was released during the Halloween of 2007 on the PlayStation 2, PlayStation Portable and Wii, and for PC in November 2009.

A psychological horror title in which players are forced to participate in a series of snuff films, Manhunt was highly controversial among videogame critics at the time of its release, although it received positive responses from game reviewers for its atmosphere and depiction of violence.

Manhunt is notable for its tie-ins with Rockstar Games' flagship series, Grand Theft Auto, especially with games within the 3D Universe continuity. It is noted for its usage of Carcer City as its primary setting; a location originally mentioned in 2001's Grand Theft Auto III. Its sequel, Manhunt 2, still contains references and relations to the Grand Theft Auto franchise.

References and crossovers with the Grand Theft Auto series

Many vehicles from the GTA series appear in the Manhunt games, both as props and working vehicles.

However, there are also a few vehicle models in the Manhunt series, that while they look similar to various GTA vehicles, were not taken directly from the GTA series. These include as a step van that resembles the Boxville, a box truck comparable to the Yankee, and the Cerberus armored van, which is similar to the Securicar.

Manhunt figurines on the shelf at Zero RC in GTA San Andreas. 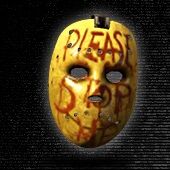 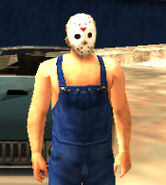 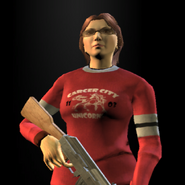 Wikipedia has an article on:
Manhunt (video game series)