View source
watch 02:59
Wiki Targeted (Games)
Do you like this video?
Play Sound
For the GTA Online vehicle added in the Bikers update, see Manchez.
Not to be confused with Sanchez.

Standard White - 100%
“Winner of this year's San Andreas Free Enterprise Awards, the Manchez Scout is the kind of innovation that's only possible when you convince the military industrial complex that the phrase "weapons-grade dirt bike" is a defense contract waiting to happen.”

The Maibatsu Manchez Scout is a military off-road motorcycle featured in Grand Theft Auto Online as part of the The Cayo Perico Heist update.

The vehicle is depicted as a military/utility variant of the Manchez, and appears to take strong influences from the Armstrong MT500, with some elements of the Kawasaki KLR 250.

The bike shares the general profile, handlebars and single exhaust as the original Manchez, and featuring protective frames on the front and sides of the engine bay. The engine bay itself is identical to the Manchez, featuring a single exhaust pipe passing through the left side, before leading to the right side. However, it features large rubber covers on the front forks and a large cover on the front brake disk. A large front fender with small circular turn signals can be seen mounted on the lower triple clamp, while the area above the upper clamp features a large fairing with a square headlight, a set of circular mirrors on the handle grips and a small dial set with the same "Sports Bike" dials seen on the regular Manchez and various sport motorcycles.

On the rear section, there is a long rear fender with a rugged seat, a rear rack and a set of tail lights with a similar pattern to the front ones, with a single square red light and circular turn signals. The rear swingarm is relatively narrow, featuring dual suspension shocks and a clamp-like component covering part of the chain drive, along with the exhaust muffler on the right side of the swingarm.

The primary color of the bike is applied on the front disk cover, fenders, fairing, fuel tank, side panels and swingarm, while the secondary color is applied on the handlebars, rear portions of the forks between the clamps, protective frames and rear rack. It uses the same wheel design as the Manchez, the Sanchez and the Enduro, being an off-road derivative of the "Wires" rims available in Los Santos Customs.

The Manchez Scout makes up for being an excellent off-roader coupled with excellent maneuverability, yet having an average top speed and acceleration that cannot keep up with the original Manchez. Unlike the original one, the player can pull a wheelie even at low or high speed as long as the player doesn't crash into objects or other vehicles. Because of its average top speed, it is better suited for races with rugged terrain and has more corners than straights.

The Manchez Scout is powered by a single-cylinder engine and coupled to a 5-speed gearbox. Its engine sound is a lower-pitched variation of the one used in the regular Manchez and the BF400.

Installing any "Top Box" modification will increase its traction slightly, in the same way as a spoiler. 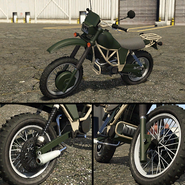 The Manchez Scout in the cinematic preview on Rockstar Games Social Club.