View source
watch 02:56
Raise a Floppa - The Loop
Do you like this video?
Play Sound
For the GTA Online vehicle added in The Cayo Perico Heist update, see Manchez Scout.
Not to be confused with Sanchez.

Standard White - 100%
“The act of launching yourself off a fat dirt jump, achieving a torrential climax using nothing more than your powerfully throbbing saddle, and then landing upside down in a heap of shattered bones, engine parts and bodily fluids. Part fetish, part deathwish, part bloodsport.”
— Southern San Andreas Super Autos description.

The Manchez is a dirtbike featured in Grand Theft Auto: Liberty City Stories and Grand Theft Auto Online as part of the Bikers update. It is manufactured by Maibatsu in the HD Universe.

The Manchez resembles a 500cc KTM. It features a similar dirt-bike design to the Sanchez, but has a smaller front fender, a square front fairing with dual circular headlights, no central frame between the handlebars, a smaller fuel tank with lower side panels around the engine bay, larger rear side covers and a slightly shorter rear fender with a different tail light design.

The Manchez is only available in a red color applied to the front fairing, fuel tank and rear fender, and a navy blue color for the front fender and side covers. It shares the same wheel design as the Sanchez.

The vehicle retains the dirt-bike design from its previous iteration, but has a more compacted wheelbase and lifted ride height. Although the bike has no clear inspiration, its bodywork shape closely matches with that of the Mountain Moto FX models (specifically the FX5), only with a more robust design.

Like the BF400, the Manchez features a small front fender attached to the front wheel by dual frames, black front forks with chrome legs and black ends, chrome triple camps with colored trim and a long casing with a square headlight. The handlebars are connected by dual support frames and feature a thin central frame, along with a black compacted dial cluster with the "Sport Bike" dials seen in motorcycles such as the Bati 801 and the Akuma.

The bike uses a long rear fender with black sections on the sides, a black seat spanning the whole upper surface of the fender and a small rectangular tail light on the rear end, while the area below it uses a set of frames holding the foot pegs for the passenger. The black dual-sided swingarm is supported by a single suspension spring with a yellow gas cylinder and features a black flat mudguard plate between the swingarm pivot and the rear wheel, along with the exhaust muffler on the right side of the swingarm.

The primary color of the bike is applied on the front fender, the trims of the triple clamps, the upper halves of the fuel tank and the rear fender, and the upper side of the engine block, while the secondary color is applied on the handlebar supports, the capped ends of each handle grips, the lower halves of the fuel tank and rear fender, and the details around the rear frames holding the passenger foot pegs. It uses the same wheel design as the Sanchez and the Enduro, being an off-road derivative of the "Wires" rims available in Los Santos Customs, with a permanent black color.

Based on its rhyming name, the Manchez is implied to be an improved variant of the Sanchez, giving the player much more stability, durability, speed, and maneuverability. The Manchez is one of the best vehicles in the game, having the handling, speed, agility and size required for all stunt jumps. It has extreme off-road capabilities, and has good acceleration.

The vehicle appears to be powered by a single-cylinder engine and coupled to a 5-speed gearbox, and uses the same engine sound from the Sanchez.

Performance-wise, the Manchez has similar statistics to the Sanchez, although it has a slightly lower top speed. While it cannot perform wheelies at higher speeds like the Sanchez (unless in an off-road environment), it can still do it by pulling a wheelie at low speed and then reaching a high speed, increasing the rate at which the wheelie is kept up for more speed and better acceleration, at the cost of a severely jeopardized handling and braking distance. It can also perform wheelies at even lower speeds before reaching to a full stop and the rider won'f fall back even by fully pulling it back on a flat surface, making it an excelent choice for the Longest Wheelie Challenge on mostly straight roads.

Like the Sanchez, the vehicle is powered by a single-cylinder engine and coupled to a 5-speed gearbox. It uses the same engine sound as the BF400 and the Street Blazer. 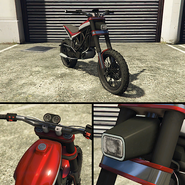 The Manchez on the updated Rockstar Games Social Club.

The Manchez in the cinematic preview on Rockstar Games Social Club.