Man-at-Ease is a clothing store that appears in Grand Theft Auto: Vice City Stories. Its only known location is in the southwest wing on the second floor of the Vice Point Mall.

The interior is the second largest store accessible to the player (just after Flyingdale's).

The store's logo also appears on some Mules.

By 1986 (the setting of Grand Theft Auto: Vice City), Man-at-Ease appears to have gone out of business and has been replaced by several unnamed clothing stores. 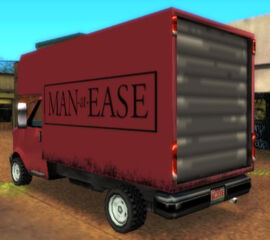 Man-at-Ease logo on a Mule.

Retrieved from "https://gta.fandom.com/wiki/Man-at-Ease?oldid=1165357"
Community content is available under CC-BY-SA unless otherwise noted.