Yes
“Affordable, easy to fly, held together with rivets... The Mammatus is one of the best-selling light aircraft in history, and a whole lot of fun to land in high winds.”
— Elitás Travel description.

The Mammatus is inspired by various Cessna aircraft, including the 172 Skyhawk, 177 Cardinal and 182 Skylane.

The design of the plane is very similar to the 3D Universe renditions of the Dodo, having a relatively long fuselage with a two-bladed propeller and twin circular taxi lights on the nose, as well as a small engine compartment. The main section consists of the cockpit with the wings mounted on top (high-wing setup), having small antennae above and additional circular taxi lights on each wing, which are activated like high-beam lights. The tail boom and empennage are relatively basic, having large stabilizers and two small antennae on the vertical one, as well as another antenna behind the rear window. The vehicle features wheel spats.

The interior of the cockpit is similar to the Maverick, having the corresponding flight instrument and control stick. In the enhanced version, it gains a restored interior with the same "Flyer" dials and details also used on the Maverick and many other basic aircraft. It has a rather symmetric arrangement on both halves of the panel, albeit with additional red switches on the left-hand side. Even though it only has two doors, the plane can carry four occupants, where players will simply warp to the rear seats when the front ones are occupied (similar to the Velum).

The vehicle normally spawns in a white primary color on the fuselage, as well as a secondary color on the rotor spinner, upper surfaces of the nose and wheel spats, the upper and lower borders of the side stripes, the wing tips, the elevators, and the upper half of the stripe on the vertical stabilizer. The side stripes and the lower half of the stripe on the vertical stabilizer are actually assigned with the wheel color. The wheels are mostly covered, but when airborne, they reveal to be the same plain industrial-type wheels seen on aircraft such as the Cuban 800 and the Velum. 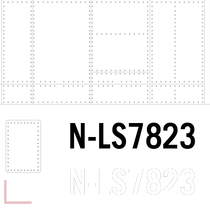 The Mammatus possesses great acceleration, but a low top speed, being slower than the Duster. This makes the Mammatus one of the slowest airplane in the game. Its take-off distance may be short, but once airborne, it can begin to sink dramatically, requiring extra care during take-off. Its landing speed, however, is excellent, and it can come to a stop almost immediately. The Mammatus is one of the best aircraft for beginning pilots because of its stable flight characteristics and low turbulence. Its four seats also make it a useful and cheap crew/group transport in Grand Theft Auto Online.

The Mammatus is powered by a single piston engine, which seems to reuse the cam cover and spark plug textures from a V8 engine, with what appears to be a Rocker cover from an inline-4 engine on the center. Various components can be seen beside the engine, appearing to use alternator textures, along with the batteries. It uses a traditional piston engine sound, similar to the Duster and the Mallard.

Upon being converted into a personal aircraft, the Mammatus can be repainted with a primary color and a secondary color, but part of the side stripes cannot be repainted, as there is no wheel color option. It also has three liveries, which are the aforementioned registration numbers.

Screenshot of a Mammatus. 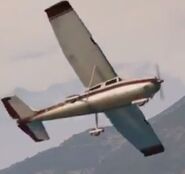 The Mammatus in the Grand Theft Auto Online trailer. 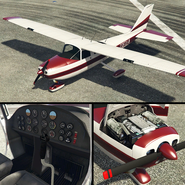 The Mammatus on Elitás Travel.

The Mammatus on the updated Rockstar Games Social Club.

The Mammatus in the cinematic preview on GTA V Rockstar Games Social Club.

The Mammatus in the cinematic preview on GTA Online Rockstar Games Social Club.