"I hope you're less full of shit than your cousin, here."
― Mallorie Bardas

Mallorie was born in Puerto Rico, later moving to South Bohan, Liberty City. She occasionally works as a dancer for Manny Escuela in South Bohan, as well as an employee for Roman at his taxi depot in Hove Beach. Mallorie has been arrested on two occasions: in 1998 for joyriding and in 2002 for being in possession of a controlled substance (marijuana).

In 2008 (the setting of Grand Theft Auto IV), Roman's cousin Niko discovers that she is having an affair with Vladimir Glebov, but only because Vlad promised to settle Roman's debts if she slept with him. Although Niko warns Vlad multiple times to stay away from her, Vlad blows off the threats. Eventually Roman sees Vlad's car parked outside of Mallorie's place and puts two and two together. Roman goes to Niko for support, but when Niko reveals that he had suspicions of the affair, it only makes Roman feel more upset and betrayed. Feeling bad about not informing Roman or doing more to stop the affair, Niko decides that it's time to deal with Vlad once and for all, and the cousins head to the Comrades Bar to put a final end to both Vlad and the affair. Although at the time Roman seems to want a peaceful solution to the problem and calls Niko a "hot headed chump" after he puts a bullet in Vlad's eye; later in the game he tells Mallorie that it was him, not Niko, that killed Vlad in a jealous fit of rage, and that Niko helped him dispose of the body. When Mallorie tells Niko this, he plays along and supports Roman's claim, and tells her that Roman is an "old school romantic".

Later in the game, after Dimitri Rascalov has Roman's taxi depot and apartment destroyed, Mallorie's cousin allows Roman and Niko to stay at their flat in South Bohan. Mallorie introduces Niko to Manny Escuela and Elizabeta Torres. Later, Mallorie calls Niko to tell him that Roman was kidnapped, and Niko manages to rescue him. At the end of the game she marries Roman at a church in Suffolk and reveals that she is pregnant. In the Revenge ending of the game, Roman tells Niko that if they have a daughter, they will name her Kate, after the late Kate McReary (who was gunned down during their wedding by Jimmy Pegorino). During the Deal ending, Mallorie is left a widow (Roman was shot and killed while Niko disarmed an assassin) and tells Niko that the child will struggle without a father. Niko promises that her son "will never have to worry about anything." 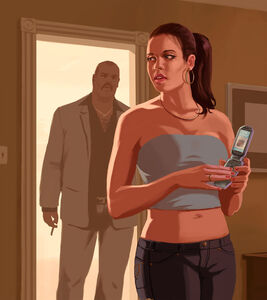 A picture of Mallorie.

Mallorie and Roman's Wedding.
Add a photo to this gallery

Retrieved from "https://gta.fandom.com/wiki/Mallorie_Bardas?oldid=657890"
Community content is available under CC-BY-SA unless otherwise noted.