20
For the plane in Grand Theft Auto: San Andreas also called "Stunt" in the files, see Stuntplane.
“The ultimate kid's toy with adult consequences, this aerobatic stunt plane offers unparalleled handling and performance for the budding free-style [sic] pilot. Nothing gets her hot like seeing you do 5G barrel rolls until you nearly black out. From slow roll into slow clap into hammerhead into scream for daddy, this is perfect for the kind of rich showoff who wants to prove he's still got all the moves. No room for passengers, it's just you and your mortality battling it out up there.”
— Elitás Travel description.

The Mallard may be inspired by the Zivko Edge 540 or the Extra 300S, and it also appears to have some details taken from the Extra EA-230. It shares some similarities with the same Pitt's Special S1-based Stuntplane from Grand Theft Auto: San Andreas, but with a longer wingspan, taking the form of a small, mid-wing aircraft instead of a biplane.

The aircraft is depicted with a seemingly small fuselage, where the front has a two-bladed propeller and a rather wide nose, with the engine bay textures on each side, together with dual exhausts on the lower side and two wheel fairing/spats on its main landing undercarriage. Around the main section, there is a small cockpit with a sliding canopy and open vents below, as well as two wings mounted around the middle level, fitted with aerobatic horizon reference devices on the wingtips. Towards the tail boom and empennage, there is an elevated section behind the cockpit that gradually decreases in height towards the vertical stabilizer, while the horizontal stabilizers and tail landing wheel can be seen on the end. The interior of the aircraft is very compact and mostly stripped-out, having visible frames around it and a small flight instrument panel. In the enhanced version, it uses the "Flyer" dial set derived from the Maverick and the Police Maverick, with the functional ones around the central section of the panel.

The airplane is available in three different schemes: a plain white-red scheme, a Redwood Cigarettes red-blue scheme and a Sprunk green scheme, while files indicate it only spawns in a white primary color and a red secondary color. The wheels do not have a textured rim design and are mostly hidden within the aircraft's landing undercarriage, unless the aircraft is destroyed and the wheels detach.

The Mallard's engine is capable of delivering sufficient thrust to achieve excellent acceleration and top speed. The aircraft's light body makes it very maneuverable and agile, and it is able to perform various aerobatic stunts without difficulty, making it an ideal choice for beginner pilots, as well as the Under the Bridge and Knife Flights challenges. Care should be taken when landing the plane or taxiing around uneven terrain, as the wheel spats can collide with small obstacles or constantly scratch on the ground, especially when going in reverse.

The Mallard is powered by a single piston engine, which, judging by the nose design and the engine bay textures behind the propeller and spinner, might have a flat or horizontally-opposed configuration. It uses a similar piston engine sound to aircraft such as the Mammatus and the Duster.

Upon being converted into a personal aircraft, the Mallard can have one of the three aforementioned liveries. However, there is no option to change the base color.

The Mallard being flown by Trevor Phillips.

Another screenshot of the Mallard.

The Mallard flying over the Land Act Dam.

A photo of the Mallard. 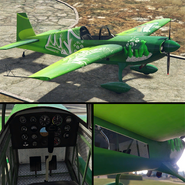 The Mallard on Elitás Travel.

The Mallard on the updated Rockstar Games Social Club.

The Mallard in the cinematic preview on GTA V Rockstar Games Social Club.

The Mallard in the cinematic preview on GTA Online Rockstar Games Social Club.