"Shit, I know about brothers, but I know about bitches as well. And this here job... *sniffs* smells like a bitch to me. It got bitch stink all over it, son."
―Malc

Malc is voiced by Walter Mudu, who also provided the voices of King Courtney and D-Ice in Grand Theft Auto III.

Malc is a member of the Uptown Riders Motorcycle Club.

Malc is one of the few characters without an entry in the LCPD Database. However, he committed criminal acts and he was linked to criminal activities.

Events of The Lost And Damned

Affiliating with The Lost

A member of the Uptown Riders, a rival motorcycle gang, called Jim Fitzgerald, affiliated himself with Malc and DeSean and introduced them to The Lost's leader, Johnny Klebitz. Malc provided Johnny with some pipe bombs, which he went on to use to destroy some of the Angels of Death's vans.

Jim introduced Malc to Elizabeta Torres, who provided Malc, DeSean and another Uptown Rider with a job alongside Johnny. The four of them went to the toll booth on the Dukes-Bohan bridge to intercept and steal a van full of heroin. They took possession of the van and dropped it off in a garage in Bohan.

Some time later, Malc and DeSean join Johnny again on a job to sell some product. However, the other dealers decided to rob Malc and the others, destroying Johnny's bike in the process, but the attempt failed. Johnny rode shotgun on Malc's bike, and the three of them eventually managed to escape from the pursuing LCPD officers.

Finally, Johnny called Malc to join him in kidnapping Roman Bellic, as Johnny felt he couldn't do it alone and he couldn't let The Lost know what he was going to do. Malc provided them with a car and they went to a gambling house in Broker, where they found Roman and put him in the back of the car. They dropped him off at a warehouse in Industrial, Bohan.

Even though Johnny calls Malc during the mission Roman's Holiday, Malc's contact is never in Johnny's phonebook.

Malc later met Johnny again while Malc was tuning up his bike. Malc and DeSean were supposed to hang out, though DeSean never showed up. Malc thought that DeSean was spending time with his girl, but he wanted to be sure that nothing terrible had happened. Therefore he and Johnny went to search for DeSean. While doing so, Malc got a call from DeSean, who said that he got shot during a bike race. The two rushed towards DeSean, only to find out that he hadn't really been hit, but they still got a few pellets in his arm from a sawn-off shotgun. Johnny, Malc and DeSean decide to go back to the other racers and kill them.

Again, Johnny encountered Malc and Johnny again made jokes of Malc's Japanese sports bike. Malc finally challenged Johnny to a race, which Johnny agreed upon. The two went on towards the nearby starting point. After the race was done, they parted ways again.

In the year 2013, Malc appears in Los Santos, where he helps introduce the player to motorcycle clubs. Following his association with the GTA Online Protagonist, his status is unknown, as he does not appear in GTA V. 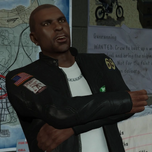 Malc on his orange Double T in GTA Online.
Add a photo to this gallery

Retrieved from "https://gta.fandom.com/wiki/Malc?oldid=1009312"
Community content is available under CC-BY-SA unless otherwise noted.