GTA Wiki
Register
Don't have an account?
Sign In
Advertisement
in: Businesses, Businesses in GTA IV, Nightclubs,
and 4 more
English

The Lost and Damned
The Ballad of Gay Tony

2
“A private venue for after dinner drinks catering exclusively to members and their friends. If you did not know that, you are very unlikely to get in. Located in Algonquin, Liberty City - but if you have to ask where beyond that, you are definitely not our sort of person. Founded in 2003 by Liberty City's 20-year reigning king of nightlife, Tony Prince.”
— TBoGT Official Website

Maisonette 9 is a famous "Members only nightclub" owned by Tony Prince in Algonquin, Liberty City in Grand Theft Auto IV as well as its episodic titles, The Lost and Damned, and The Ballad of Gay Tony.

GTA IV and The Lost and Damned

Located on Galveston Avenue in Westminster, Liberty City, the club itself is referenced occasionally in GTA IV. During Out of the Closet, Tom Rivas mentions both Maisonette 9 and Hercules, another club owned by Gay Tony. Other characters from GTA IV who are known to have visited the club include Roman Bellic, Brucie Kibbutz, Gracie Ancelotti (as revealed during ...I'll Take Her), Alexandra Chilton and Carmen Ortiz (Carmen refers to the club as "Bungalow 9" during dates with Niko), and Niko mentions the club in a negative reply to Brucie Kibbutz on Mail.eyefind.info (where he misspells it as "Masionette 9"). The club is later reported by the Libertytreeonline.com to be closed alongside Hercules following allegations of drug pushing in the premises. Although it is mentioned in GTA IV and The Lost and Damned, the club is inaccessible in both games.

According to the official website, Maisonette 9 was founded in 2003 by Tony Prince, and is located at the basement levels of a warehouse-turned loft on Galveston Ave, along the Westminster—Meat Quarter border. The club itself only exists physically in The Ballad of Gay Tony, whereas the same location in GTA IV and The Lost and Damned is nondescript. Luis Lopez works as a bouncer at the club and as Tony Prince's personal bodyguard. Other Maisonette 9 clubs are currently operating in London and Las Venturas.

As Luis works in Maisonette 9 as a bouncer, the player can access the club and interact with its patrons. Luis can dance, compete in a champagne drinking game, drink shots or manage the club. Maisonette 9 also serves as mission destination points. Following Ladies Half Price, the club is temporarily closed, but re-opens after the final mission of the game.

If the player fires a weapon or causes a disturbance whilst inside the club, Luis will be banned from the club for 24 hours.

Luis can drink alcohol shots at the bar for free. He starts getting drunk at four shots. If Luis drinks nine shots, he will get wasted and blackout. A few hours later, Luis will wake up in different places around the city (such as Middle Park, Happiness Island, Star Junction etc.), still slightly hungover.

The player can try the Champagne mini game in the VIP floor upstairs. Firstly, Luis shakes the bottle and sprays champagne on the other people, then must drink the rest of the bottle without vomiting. The player must turn the joystick not too fast or slow and the player should win. If Luis has previously had a drink at the bar, he may vomit. Should Luis fail to win, he will wake up at a random location in Liberty City, most likely due to passing out from intoxication.

To start the Club Management mini-game, walk into the room in Maisonette 9 that has a "Management Only" sticker on it. The objective is to make sure that there is no trouble in the the club. People can be thrown out for various activities, such as Drug Dealing, being too drunk, trying to skip out on their bar tab or men sexually harassing women in the club. At some point during the mini-game, Joni may call Luis to go back to her office and seduces him. She may give him a lapdance, a blowjob or they may have sex against a table in the office. Occasionally, while in Club Management, Luis will receive a call from (usually) Dessie or Gay Tony, asking him to help out a VIP celebrity. There are eight celebrities who require assistance, and assisting all eight contributes towards 100% Completion.

The nightclub (the interior in particular) is most likely inspired by the Bungalow 8 nightclub in New York City, as both 'bungalow' and 'maisonette' mean "small house".

A poster for Maisonette 9.

Joni, one of the workers in the club. 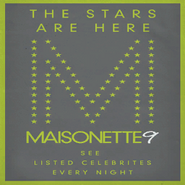 The sign found on the door to Tony's office.