View source
Not to be confused with the crime syndicate; Zaibatsu Corporation, or the game developer Kaihatsu.

Mitsubishi
“A Japanese multinational conglomerate that manufactures cars, electronics, cruise missiles and just about every other product on the face of the planet. The definition of over-diversified.”
— Description at Bawsaq.com.

The player can buy stocks from them at the Bawsaq.com website in GTA V. The name "Maibatsu" is a portmanteau of Mitsubishi and Daihatsu, and is also similar in name to "Zaibatsu" (財閥), a Japanese term for a large conglomerate. Maibatsu's description as an "over-diversified" company reflects Mitsubishi Group's incredibly diverse products, from cars (Mitsubishi Motors Corporation/MMC), heavy equipment (Mitsubishi Heavy Industries), aircraft, and home appliances.

Although the Maibatsu Corporation is most famous for the vehicles it manufactures, Maibatsu also manufactures, among many other things, electronics and cruise missiles.[3]

An ad for the Maibatsu Monstrosity from the American and Australian GTA III handbooks, a rebadged Landstalker.

An ad for the Maibatsu Monstrosity from the European GTA III handbook.

Alternative Maibatsu logo with a filled in background. 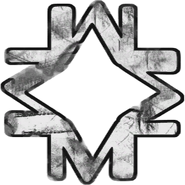