The Madrazo Cartel or simply called The Cartel is a Mexican drug cartel led by Martin Madrazo that has a minor role in Grand Theft Auto V.

The Online Protagonist is hired by Martin Madrazo to perform several jobs including rescuing two cartel members, his Chief Lieutenant who is under attack from Ballas in Burton and his cousin who is surrounded by law enforcement in Paleto Bay. After reaching El Estupido, cartel members are sent to eliminate him on the assumption he has been compromised by law enforcement and the player must fight the cartel hit squads.

Even thought The Cartel is allied with the Online Player, They are one of gangs who the players tried to steal the raw materials for their buisness in the Bikers resupply mission and the GunRunning DLC resupply mission

Their only appearance as a gang are in the level "Marriage Counseling", one of Michael De Santa's missions, where they attempt to kill Michael after he pulled down the deck of a property which Martin Madrazo had an interest in. The hitmen chase Michael and Franklin Clinton to Michael's Rockford Hills mansion, where the last of them are gunned down. However, the gang's leader, Martin, beats Michael down and tells him that he owes him $2.5 million for the destroyed house. Afterwards, Michael pays his debt off. Later in the game, Martin contacts Michael asking him for a favor, to kill Martin's cousin Javier Madrazo after he had been planning to testify against the gang. After Michael shoots down the plane that was carrying Javier and Trevor manages to kill Javier as well as collect the evidence, Martin refuses to pay the two for the work. Because of this, Trevor bites off Martin's ear, kidnaps his wife Patricia Madrazo (whom he had a crush on) and steals his car. Because of this, Martin orders the gang to attack both Michael and Trevor if they enter La Fuente Blanca or Los Santos in endless waves until they exit the ranch or city. The Madrazo Cartel are again reconciled when Michael sends him an Aztec Fertility Idol that he stole from a train and Trevor tearfully returns his wife to him at the end of Monkey Business.

La Fuente Blanca, a ranch owned by Martin Madrazo, serves as the Madrazo Cartel's main area of operation. Cartel members can be seen standing guard or patrolling the ranch. Martin also owns a house in Vinewood Hills, which appears in many online missions. 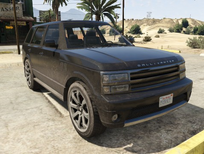 The Baller used by the cartel.
Add a photo to this gallery

Retrieved from "https://gta.fandom.com/wiki/Madrazo_Cartel?oldid=1008211"
Community content is available under CC-BY-SA unless otherwise noted.