The Machete on the Rockstar Games Social Club website.

Wikipedia has an article on:
Machete

As expected, the Machete is a long, heavy blade with a rounded design similar to that of the Knife, in contrast to the squared design of the Meat Cleaver, another bladed weapon. The weapon is wielded and used in the same way as most bladed weapons.

The Machete returns in Grand Theft Auto V and Grand Theft Auto Online, this time taking some inspiration from the Gerber Machete/Saw Combo. The machete has a bolo-style blade, most likely based on Cold Steel's Bolo machete.

In Grand Theft Auto: Vice City, the machete is considered heavy, hindering the player's ability to sprint with the weapon. When an opponent is struck and not killed with the machete, they produce a larger blood trail than the Meat Cleaver, with two direct hits will kill them (or one hit, when swung in stabbing motion). The machete is a generally good all-around choice for the melee slot in the absence of the Chainsaw, along with the aforementioned Meat Cleaver, since has generally better damage over most conventional melee weapons. Its range appears to be similar to the Baseball Bat.

The Machete acts similarly to weapons like the Hatchet, allowing the wielder to swing it against the target's head or body. Depending of the player' stance, a single swing can be lethal when hitting the target's ribs from the sides or right on the middle of the forehead.

The Machete is one of the few bladed weapons that can be used while on a motorcycle. 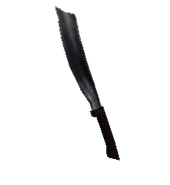 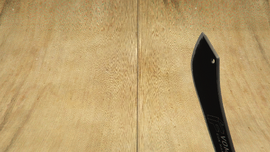