Shaun Ryder
“I know many ways to relax, but only one that it is guaranteed to work every time.”
— Maccer, from his website

Maccer is the lead singer of a British rock band called The Gurning Chimps, and in 1992 is on his first tour of the States. Maccer maintains an actual website, Maccer.net, which makes references to the events that happened in Grand Theft Auto: San Andreas, and was used as a promotional website for the game.

Maccer was voiced by Shaun Ryder, the lead singer of the Happy Mondays.

Under the management of Kent Paul, the Chimps left England in 1992 for their first tour of America sometime after Are You Going to San Fierro?, as he can be heard arriving from Manchester on West Coast Talk Radio. While in Bone County, San Andreas, Kent Paul took Maccer and the rest of the Gurning Chimps on a "peyote safari" supplied by The Truth. When The Truth woke up the next morning, he was in a bathhouse in Los Santos with the Chimps nowhere to be found. He enlisted the help of Carl Johnson, who drove out to the spot in the desert where they'd last been seen, but found only Paul and Maccer, who were in trouble with some local snake farmers. Although CJ helped Paul and Maccer escape, the other members of the Chimps were presumed dead. Paul said that "drummers and keyboardists are ten-a-penny anyway" and showed no concern over them.

Maccer and Paul continued to follow Carl around, and when he ended up getting involved with Ken Rosenberg and the Mafia, Paul and Maccer were seized by the Leone Family as bargaining chips under the orders of Salvatore Leone. Carl eventually managed to smuggle Paul and Maccer, along with Rosenberg, out of Las Venturas and back to Los Santos, where they stayed for some time at Madd Dogg's Crib.

He is last seen in the final mission, gleefully stating to everyone he is getting breast implants as a joke.

After the events of Grand Theft Auto: San Andreas

At some point after 1992, Maccer was banned from Australia[4], and went into rehab and was brought into the Epsilon Program by Cris Formage.[4] After spending time in rehab, a long series of legal battles interrupted his career.[5] As of 2004 he was planning a comeback tour.[6] 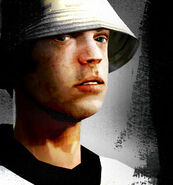 The censored animation of Maccer urinating.