The Macbeth logo from the Fagaloa.

In GTA Online, the Macbeth whisky can be bought and consumed in Nightclubs and The Diamond Casino & Resort by the player for $350. After doing so, the player will take a shot of the whisky and will pass out seconds later and wake up again in one of several random locations. In very rare instances, the player can respawn on top of the Epsilon Building, where they will wake up wearing a Kifflom T-Shirt and unlock it in the "Unlocks" menu of Special T-Shirts. In rare instances when consumed in the casino, the Damage Control Casino Work will trigger.

Macbeth may be based on The Macallan, which features a similar name and logo. 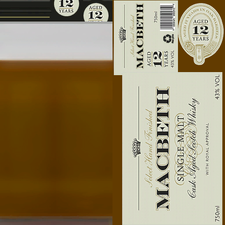 Macbeth Racer livery for the Fagaloa.
Add a photo to this gallery

Retrieved from "https://gta.fandom.com/wiki/Macbeth?oldid=1187401"
Community content is available under CC-BY-SA unless otherwise noted.