The MP5K was a weapon cut from both Grand Theft Auto: Vice City and Grand Theft Auto: San Andreas. In Vice City, it exists under the name of mpfshrt and is also seen being used by Diaz' goons in In The Beginning.... The GTA San Andreas rendition appears only in the files, in the gta_int.img. It has a dirt texture though, much like the M16 seen in Stowaway. In the same mission, there are unique crates with an MP5K picture on it.

Very little is known about the weapon, and is unknown why it was cut from both games. However, it was an earlier feature before the actual MP5 replaces it. This makes sense, as the real-life MP5K is a shortened version of the original MP5 (specifically, the MP5A2). 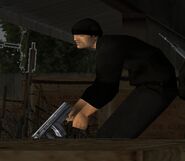 The unused MP5K as found in the game files

An MP5K in Stowaway