As the name suggests, the weapon is based on the M60 machine gun, specifically the M60E1 model. Its bipod is folded and the belt box is not inserted. Instead, the bullet belt drapes off the gun, and incorrectly feeds in from the right. Additionally, the front sight is facing backwards.

The M60 is the strongest firearm in terms of damage per bullet; the M60 takes down a police helicopter within 36 rounds, whereas most bullet-based weapons (including the Minigun) need 176 rounds to take one down. Additionally, the M60's bullets knock targets down just like shotguns and the Python, and can aim in first person just like assault rifles, with the bonus of having a 100-round load. It has a long range accuracy, and it is the only Heavy Weapon with which the player can both move to a normal walking pace and jump with it, since the M60 is wielded as an assault rifle. In GTA Liberty City Stories, it has a faster rate of fire than in Vice City.

The M60 in one of the guard towers in Fort Baxter, GTA Vice City

Tommy Vercetti with an M60. 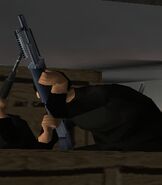 Cutscene M60 in GTA Vice City, which uses the original PS2 model (except that it lacks the front sight).

Phil Cassidy carrying an M60 in his artwork in Grand Theft Auto: Vice City Stories, though the weapon doesn't appear in this game.