M.T. Head is a minor character in Grand Theft Auto: Liberty City Stories and can also be played as a multiplayer character in the PSP version.

M.T. Head is a resident of Liberty City in 1998. He is depicted as a deli shop worker, wearing a white apron with a green T-shirt underneath, jeans, glasses, and has long red hair. He appears in the mission Dead Meat working at Giovanni's Deli, and in the mission Shop 'til you Strop working at Samo's Wok trying to shoot Maria Latore for shoplifting.

His name is either a play on the phrase meathead, which would make sense with him working at a deli/butchers. However, it could also be interpreted as empty head, as the assistant doesn't seem to be too intelligent. 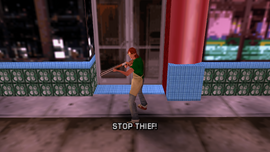 M.T. Head in the mission Shop 'til you Strop.