The Lycan in The Lost and Damned.

The Liberty Chop Shop Lycan is a chopper style motorcycle in The Lost and Damned.

The Lycan is a motorcycle based on an Orange County Choppers Pro Street, having an oval headlight and an edge-like rear end. The bike has "Lycan" badges on the sides of the box-shaped oil tank and an emblem on both sides of the wide fuel tank, on the engine's lower cover on the right and on the left transmission belt cover. The exhaust pipes are made with a blue-ish finish, likely because of the short length and a short ram pipe placed where an air filter is usually mounted.

The beta version of it exists in the PC version of Grand Theft Auto IV. It is However, with slighty undetailed textures, as well as the transmission chain. These issues were fixed on TLAD. It also has no blue-ish finish on the exhaust pipes.

The general performance of the Lycan can be considered good, having average top speed, acceleration, handling and braking power. While it is not as fast as the Angel or the Daemon, the Lycan is still a good choice, especially for cruising around Liberty City. However, like most choppers in the game, is rather difficult to perform wheelies and stunts with this bike. 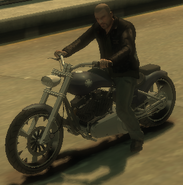 A Lycan in TLAD being ridden by Johnny Klebitz.

A custom Lycan in Yusuf Amir's apartment in The Ballad of Gay Tony.