S_M_M_GenTransport (Pilot)
“When it comes to luxury private jets, this is the cream of the crop. With a Luxor you're joining an elite club of all the best kind of people: super-rich celebrities, businessmen and African dictators.”

The Luxor is distinghishable by its black and white/gold paint scheme, with an emblem located on the tail. The aircraft features multiple yellow/gold swept back lines down the side of the fuselage to the empennage, as well as stripes on the winglets. 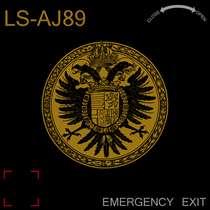 The Luxor is a good way for a leisurely flight but not so in a competitive way. The Luxor is on par with the Shamal as the fifth-fastest aircraft, outperformed by the Hydra, P-996 LAZER, Besra, and Vestra. However, the Luxor has the least mobility and the greatest vehicle mass in a GTA Online Air Race; It won't take corners as sharply as the Duster but it can keep up a good lead in the straight.

The size and weight of the Luxor along with its retractable gear produce enough drag to tear the landing gear off, and in reality is highly advised against to leave landing gear protruded.

Upon being converted into a personal aircraft, the Luxor can only be repainted with a primary colour, which affects the shading of the vehicle, as it has an unremovable livery. Only the "Emergency Exit" marked section appears to reflect the actual colour.

A Luxor in flight.

A Luxor with its door open at Sandy Shores Airfield. 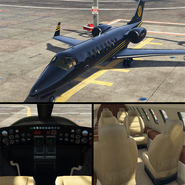 The Luxor on Elitás Travel.

The Luxor on the updated Rockstar Games Social Club.

The Luxor in the cinematic preview on GTA V Rockstar Games Social Club.

The Luxor in the cinematic preview on GTA Online Rockstar Games Social Club.