View source
watch 02:56
Raise a Floppa - The Loop
Do you like this video?
Play Sound
For the mission in Grand Theft Auto: San Andreas, see Lure.

Niko Bellic getting ready to snipe

In-game time
“Tell it to the judge. Tell him I only sent you to kill one guy...So it ain't your fault. I wonder what he'll say? Maybe he'll let you walk - On account of you being braindead and totally fucking mentally retarded!”
— Francis McReary

Lure is the penultimate mission in Grand Theft Auto IV given to protagonist Niko Bellic by Francis McReary.

Francis angrily greets Niko by the fountain in Castle Gardens. He explains that although Clarence Little has met his fate, one of Little's Chief Lieutenants is threatening to expose McReary's corruption. Francis, in turn, threatens to expose Niko to the FIB, but Niko refuses to act until he is paid. Francis then pays, so Niko agrees to take out Little's man.

Niko drives to a Feltzer in a parking lot near Union Drive East, which Francis has stored a Sniper Rifle in. Niko then drives to the man's apartment, where he will phone in Francis to receive more details about the target's location. Niko makes all the way to the roof of the building opposite to the target's apartment. A cutscene playing showing Little's right hand man watching TV, but Niko cannot see him at this point. At this point, Francis phones Niko and gives him some advice on how to lure the man to the window.

There are a number of different ways to kill the man.

Sniping him from the opposite building

Luring him out from his safehouse

If the player wants to attempt to eliminate the target by making him leave his apartment, there's some options available.

Getting him out of the safehouse will make him run to his Dukes parked outside. It is possible to kill him as soon he opens the building's door or chasing him in the car (he'll drive in a random pattern and not too fast). By destroying the Dukes before he gets in, he'll try to run into the alley behind his apartment building. If Niko shoots at him, he'll fight back with a pistol.

It is also possible to request a car bomb from Packie and install it into the Dukes. The player can lure out the dealer and make him get inside the vehicle and then detonate the bomb through the cell phone before he gets away.

Either way, after successfully killing the target, the player must get out of the area to complete the mission. 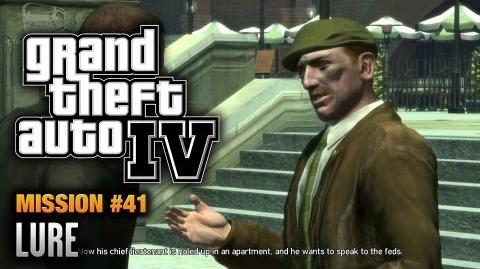