The Lucky Wheel is the most straightforward gambling method available at the casino. After purchasing a one-off standard casino membership for $500, the player can spin the wheel freely, but it can only be used once per real-life 24 hours per account. Just like other types of gambling inside the casino, spinning the wheel may be prohibited in some countries.

The player simply needs to walk up to the wheel and spin it, and they are awarded whatever is marked on the spot it lands on.

Unlike most gambling games in the casino, players can win an assortment of prizes. Each prize has a 5% chance of being gifted, as there are 20 spots on the wheel. These are:

The player character will react with celebratory excitement. This prize triggers a congratulations message on the PA system, an explosion graphic of golden confetti on the digital wall screens, and a text from Tom Connors:

"Hey, a little bird told me we have a big winner... CONGRATULATIONS! That's a nice set of wheels. I'm already raising a glass of bubbly on your behalf. Your mechanic has the keys, so give them a call and take it for a spin."

The podium vehicle can be sold, but has $0 value unless the player has applied additional customization after winning it, in which case they will get 50% of the modification costs back. 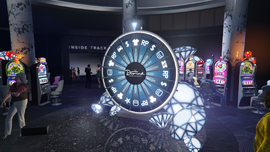 The wheel in its default position.

Retrieved from "https://gta.fandom.com/wiki/Lucky_Wheel?oldid=1314292"
Community content is available under CC-BY-SA unless otherwise noted.