The chain sells a variety of meals including sandwiches and fried chicken. It is likely a minor competitor of the much larger Cluckin' Bell chain, which also specializes in fried chicken. Lucky Plucker is a small chain, similar to Bishop's Chicken, suggesting that it might be an emerging business. It only has one restaurant in operation in Davis and is in the process of opening its second store in Little Seoul, adjacent to the Weazel News Building.

Its logo and iconography are similar to, and indicate a parody of, Popeye's Louisiana Chicken. The name itself is probably a play on "Lucky fucker".

Lucky Plucker have two outlets in Los Santos; one in Little Seoul, and one in Davis. The two building remain almost identical in design, albeit the Little Seoul branch is said to be "opening soon" and still has signs of renovation. Both outlets have large menu screens mounted on the walls and on a sign at one corner of the building. In the original version of the game, both buildings had the same menu, bearing a blue scheme and relatively worn and dirty. In the enhanced version of the game, the menu texture was since updated at the Little Seoul branch with a completely new menu design, but remains the same at the Davis branch. 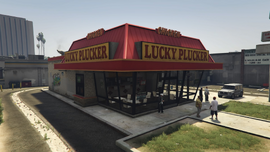 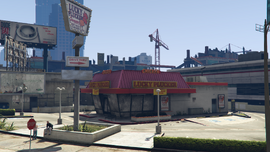 Lucky Plucker menu at the Davis outlet in the original version of the game.

Lucky Plucker menu in the enhanced version of the game. 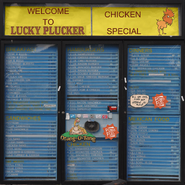 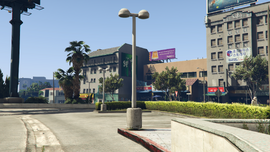