In-game time
“Shit, I need you and some other obedient motherfucker to take on the Ball Aches. Get in they face. One of you's sniping, one's on the ground.”
— Lamar Davis

Lowrider Envy is a mission in Grand Theft Auto Online, and is the fifth mission given by Lamar Davis to the GTA Online Protagonist in the Lowriders update.

“Eh, wassup?
When the majority of people goin' grasp the new order of things? When?
I mean y'all treat me with the silent deference I deserve. But when is it goin' catch on?
Works for you...
Shit, I need you and some other obedient motherfucker to take on the Ball Aches.
Get in they face. One of you's sniping, one's on the ground.
I'll call you when you in La Mesa.
”
— Lamar
A new Lamar mission is available at

“One of you provides cover while the other creeps on a Ballas operation.”
— Level Description

The players arrive at a lot in La Mesa being used by the Ballas. One player must go to an overwatch position with a sniper rifle and assist the other player in taking down all the Ballas in the area without alerting the other Ballas, using a suppressed weapon. While the mission design is meant for the players to use microphones to coordinate their shots, should the ground player be quick and accurate with their silenced weapon in taking out the pairs of Ballas, the mission may go a lot smoother and is less likely to result in a fail.

Once the lot is clear, the player on the ground has to destroy a Balla lowrider, at which the explosion summons many Ballas to attack the lot. The players can choose to take them all down, or quickly steal the target car, a customized Chino, while under gunfire with the other player. The players are directed to a lockup garage in Downtown Vinewood, across the street from the Vinewood Plaza Hotel, while avoiding several Balla waves in Ballers on the road.

The players getting into position.

Taking out a Balla.

The sniper getting into position.

The players taking out members of the Ballas.

Preparing to destroy a lowrider.

Fending off the Ballas.

Getting into the Chino.

Delivering the Chino to the garage.

A Families member meeting with the players. 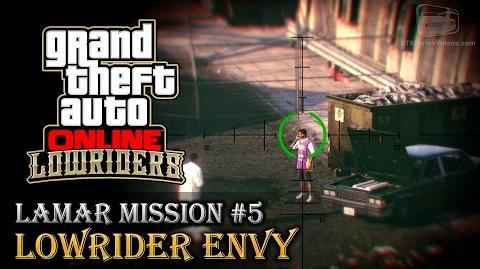