Love On The Run

Donald Love fails to meditate due to the fact that the Colombian Cartel is out to get him.

Bringing The House Down

Toni Cipriani: "Your message seemed kinda anxious."
Donald Love: "Anxious? I'm meditating. Anxious, moi? I'm at one with the universe. That's just impossible. Oh, shit, that's right. Um, there is a load of Colombians coming up here to potentially kill me if I don't keep my mouth shut and pay them all off."
Toni Cipriani: "Oh! I guess that would explain all the Colombians hovering around outside."
Donald Love: "Oh shit! Please, Antonio, you have to get me out of here! I don't want to... Please! I don't wanna die! I don't..."
—Donald Love tells Toni Cipriani about his problems with the Colombian Cartel.

Love on the Run is the final mission in Grand Theft Auto: Liberty City Stories given to protagonist Toni Cipriani by Donald Love from a mansion in Cedar Grove, Shoreside Vale, Liberty City.

Toni arrives at a mansion in Cedar Grove to find Donald meditating. Donald informs Toni that the Colombian Cartel are coming to kill him unless he stays quiet and pays them off, with Donald asking for Toni's help. They leave the mansion and are attacked by the Cartel, who are coming in Cartel Cruisers. After Toni manages to kill all of the Cartel members, he drives Donald to Francis International Airport, where Donald bids Toni farewell and escapes on an airplane, which also has the corpses of Avery Carrington and Ned Burner aboard.

The reward for completing the mission is $6,000 and the mission The Shoreside Redemption is unlocked.

Colombian Cartel members will be hostile to Toni and will shoot him on sight if he walks or drives around their territory.

Salvatore Leone: Toni! This is Sal! You did it! I can hardly believe it! We're nearly home free kid! Come and see me. We just got a few loose ends to tie up.

Head up to the house.

Donald is struggling to calm down by meditating.

The Colombian Cartel is after Donald unless he pays them off and keeps his mouth shut.

Toni informs Donald that he saw Columbians outside.

Donald begs Toni to rescue him from his desperate situation.

Toni agrees and Donald promises that he will make it worth his while.

Take out those Colombian gangsters!

Body Armor can be found in the garage where Donald is taking cover.

Toni tells Donald that the coast is clear.

Looking at the aftermath, Donald is upset that his garden has been vandalized.

"We can do some landscaping or escaping.", says Toni.

Head to the airport.

Toni and Donald have safely made it to the airport.

Donald requests for a lift to Avery's jet, with Avery and Ned Burner corpses on board.

Donald is not a fan of goodbyes.

Toni says goodbye in his own way as well. 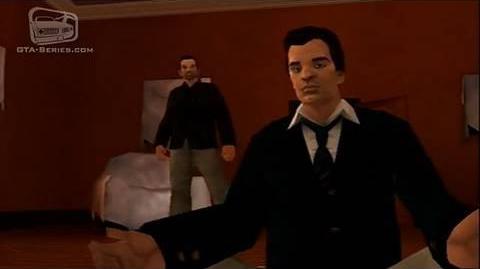 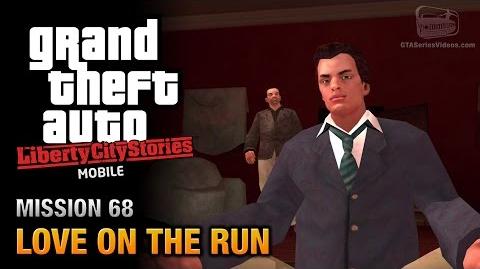