In GTA III, the building is owned by Donald Love and is the suggested headquarters for Love Media. It is also the second tallest building in Bedford Point and the fourth tallest in Liberty City. During the course of the game, Claude comes to the building to receive missions from Donald Love. As seen in all mission cutscenes, there is an ambient Asian garden set at the very top of the skyscraper. The garden is used by Donald and the Old Oriental Gentleman as a setting for practising Tai Chi. The rooftop has many amenities such as a treadmill, two penthouses, bonsai trees, and a small pond.

The rooftop is normally inaccessible during normal gameplay. If accessed, everything but the ground isn't solid in contrast to the cutscenes.

In GTA Liberty City Stories, the building is present, but doesn't appear to be used as the Love Media building. However, the Love Media vehicle competition garage side-mission is located at this building, and in some missions for Donald Love, Toni Cipriani has to drop off items to a garage at this tower. 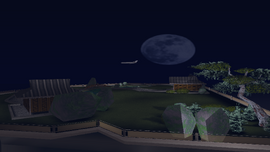 Retrieved from "https://gta.fandom.com/wiki/Love_Media_Building?oldid=1270505"
Community content is available under CC-BY-SA unless otherwise noted.